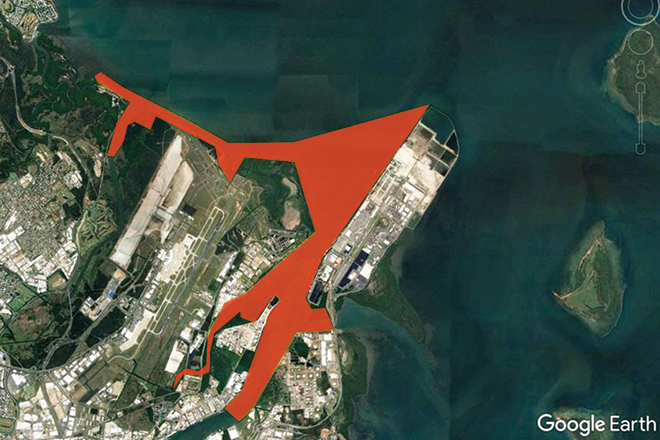 People are advised to steer clear of fishing in the orange area.

THE Queensland Government has confirmed a firefighting foam spillage at Brisbane Airport is believed responsible for a small fish kill.

Qantas has advised the Department of Environment and Heritage Protection that the spillage occurred on Monday, April 10 around 9pm. Although much of the spill was contained on the airport site, there has been a release of foam concentrate to Boggy Creek and the Brisbane River. EHP officers have collected water samples to determine what level of contaminants have entered the environment and are engaging with the responsible Commonwealth regulatory authorities to determine management and rehabilitation of the site.

The impacted area was near Brisbane Airport, from the lower reaches of the Brisbane River from Bulimba Creek to Fisherman Island and extending north to Shorncliffe. The department believes this is outside commercial fishing areas but is popular with recreational fishers, however, according to Brisbane’s commercial fishers, prawns eaten over the Easter long weekend were most likely contaminated by the toxic spill.

At least 300kg of prawns were caught from the contaminated zone of the Brisbane River and sold on to local residents over Easter because local fishers were not warned against it in time.

After Easter, and on the advice of Queensland’s Chief Health Officer, the Queensland Government advised commercial and recreational fishers to avoid consumption of seafood caught in the investigation area, which includes the vicinity of Boggy Creek and the Brisbane River from Bulimba Creek to the river mouth and north along the shoreline to Nudgee Beach, until the results of EHP’s investigations are known. Independent laboratory results of water samples taken are currently under way.

While there is currently no consistent evidence that perfluorooctanoic acid (a component of the firefighting foam) exposure causes adverse health harm in humans, the amount that spilled is considered significant. Avoiding seafood consumption from the impacted area in the short term is a sensible, cautious approach.