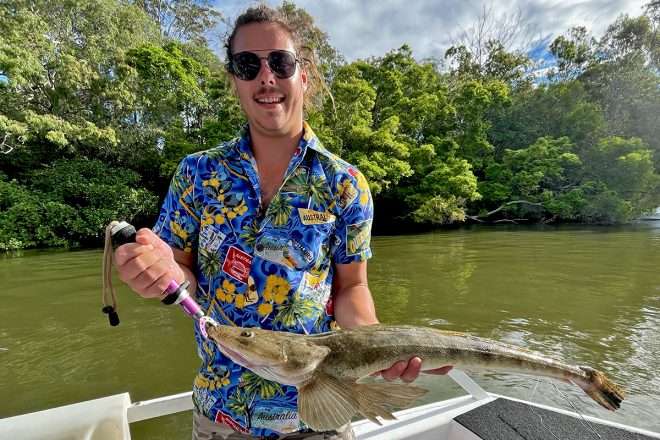 Rains hit the pause button – we have all seen some huge falls around the region, with some major and minor flooding across the region. As expected, the amount of freshwater coming down river has seen it turn a dark brown colour. With the levels rising in the Noosa River, we are all hoping it gets the much-needed flush we haven’t had for many years. The bar has been off limits also, due to the cyclone swell hitting it head on and making Mooloolaba the safer option.

With offshore on pause, attention has turned to the river for two main targets. With the fishy one being mangrove jack and the other, mud crab. For mangrove jack anglers, your best bet is to find structure and see if you can find baitfish. Try looking for any birds hanging around in numbers because trevally will ball up baitfish and mangrove jack often follow them around.

There are two schools of thought for jack fishing. One is to go in hard and heavy – running 50lb leaders and 30lb main lines. The other is of course running 6-10lb and taking your time. Maybe if you haven’t tried, you could spool your reel up with fluorocarbon for the better presentation and abrasion resistance versus running a short leader. This is something you can get away with because mangrove jack don’t often take a lot of line and tend to head straight toward structure.

Live baiting is one of the best ways to catch jack, but for those who prefer a challenge, soft plastics are the next best thing. With dirty water, you are best to use something from Keitech Australia because they have the best action and are loaded with squid scent. If not, be sure to grab one of our many scent options such as Pro-Cure Bait Scents – gels. You will find that gels adhere to plastics far better and last longer.

The beauty of bigger paddle tails is they really appeal to flathead which are also feeding in the lower part of the river. You would be best to focus your attention around the sandbags and rocks. Try to find locations out of the main current, such as the entrance to Woods Bay, and aim to fish after a high tide to make the most of the cleaner water.

For those with boats, be sure you take a spread of crab pots upriver because mud crabs have been running in good numbers this year. You are allowed four per angler, just be sure not to leave pots in the main boating channel as many anglers fish at night and these present a boating hazard.

Surf fishing will start to improve as the swell subsides and the waters clear up. Whiting have been present, as have smaller bream and some dart reaching over 40cm. For those chasing bigger fish, now is the time to do so because dirtier waters and an abundance of suspended matter let big fish hunt undetected. For bait anglers, big slabs of mullet and whole squid work well, though be prepared to deal with rays and sharks as they too will be on the hunt for a feed.

Freshwater fishing is also on pause because Borumba Dam is impossible to reach as it sits at over 100 percent capacity. Seqwater are releasing a lot of water, which has caused major flooding of the lower crossings. This make access impossible, so do not attempt to cross. Lake Macdonald is just under 120 percent capacity, which means it’s going to be dirty. The bite is more than likely going to be achieved with the aid of heavy weighted soft plastics, vibes and of course jerk baits on the pause. Look at smaller lures such as the Ecogear SX, Rapala Shadow Rap Jack Deep and the Zerek Tango Shad.

Now for all the latest information, log onto www.fishingnoosa.com.au for up-to-date bar and fishing reports, and don’t forget to drop into Tackle World Noosa, Noosa Boating and Outdoors and Northshore Bait & Tackle in Marcoola for all the right equipment, bait and advice to get you catching.