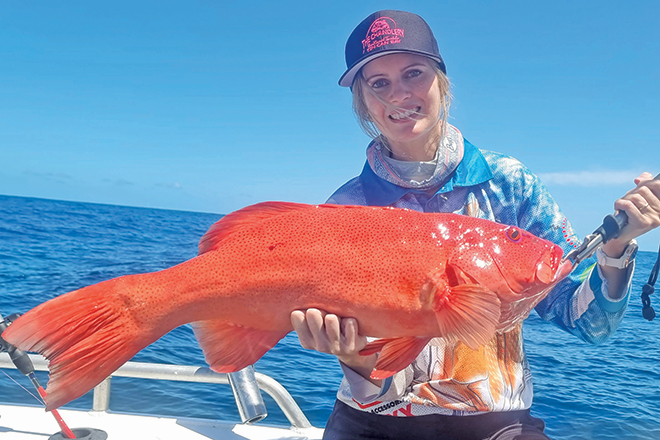 Tearing it up in Tin Can Bay

As always, I hope you have all been keeping well and getting out and banging a few good fish. Tin Can Bay

So far, the start of the year sure has been a wet and windy one! Tin Can Bay

But rain is always welcome on land and sea. Tin Can Bay

And didn’t the creeks get a good flushing – certainly what some of them needed. Tin Can Bay

Saying that, I do feel for anyone who was affected by the recent floods.

I hope things have returned to some form of normal for all impacted.

So, here is what has been going on over the past few weeks in and around the area.

Those who braved the wild weather and have been out crabbing around the lead up to the moon have been rewarded.

The flats around the power lines have been producing nice numbers and so have some of the smaller creeks up the strait.

Fresh bait and a good soaking should see you bag a feed.

Before the rain, a few of our younger fishos had been getting quality saratoga and sooty grunter in the Mary River, fishing from their kayaks in the freshwater.

Young gun Aiden Whiteman even managed to land an albino saratoga from there in early December, what a crazy looking fish!

I’ve not fished out of a kayak much, but it is something I’m keen to have a go at.

Our very own Mary River and kayak expert Marquis – also known as Chappo – has promised to take me in a couple of weeks when the water clears up a bit.

Chappo will be using spin gear, while I’ll be tossing flies on a 4wt and 6wt.

To say I’m keen is an understatement, though I’m not sure how my back is going to like it.

Stay tuned for that report.

Up the creeks, mangrove jack have been keeping fishos hooked up.

We have seen that a number of the tagged fish from our Tag a Jack competition were recaptured, with most being recorded and released again, which is good to see.

Cod – both blackspotted and gold spot – have also been around in good numbers and have not been bothered by the freshwater in the system.

Good catches of javelin fish have been reported too.

Lightly weighted prawns are proving deadly for a feed of grunter.

Speaking of prawns, the rain sure got these moving around our local systems, with Kuri Creek being the hottest place to find them.

Surprisingly, a good number of fishos have been reporting decent catches of squid.

While not giants, there have been plenty around.

Smaller jigs in 1.5 and 1.8 sizes have been working best.

They go nicely on a plate but also make an awesome live bait!

Snell a couple of 5/0 or 6/0 octopus hooks together and send them back down on a lightly weighted rig and hold on.

Along with squid, there have been nice catches of diver whiting as well – all averaging 20-25cm.

Again, they make great bait and, if you can be bothered, they make good fish and chips too.

Even with the dirty water, we have seen giant trevally and queenfish around in good numbers around Inskip and The Bluff, with a few good mackerel in the mix too.

If you’re chasing one of these string pullers, live pike have been working a treat.

Floated back in the current unweighted seems to be the trick.

There have also been a few good GTs hunting up the creeks and the flats around Ida Island.

If it’s a big bow wave moving quickly on the flats around this area, it’s normally one of two things – a spooked dugong or a GT on the hunt.

Offshore has been a little quiet over the past few weeks, mainly due to the run of windy and wild weather we’ve had.

So on those bad weather weeks, it pays to get some maintenance jobs done and out of the way.

This could be changing the bearing on the trailer, polishing the glass work, checking over all the rollers on the trailer, making sure your batteries are in good health by checking the terminals are clean and the bolts are tight… or pulling the whole floor up and replacing all the old hoses and skin fitting that have been there for 11 years, as I’ve done!

Not my favourite thing but now it is done, and I won’t have that nagging feeling in the back of my mind when I push off from the dock.

Don’t forget that The Chandlery Bait & Tackle have you covered for all your boat and trailer maintenance needs.

Along with all your inshore and offshore fishing requirements, if you need to paint it, clean it, re-glass it, rewire it or give your pride and joy a nice soapy bath… we have you covered.

Well, that’s it from me this month, so until next time, tight lines and get out there and enjoy our beautiful Great Sandy Strait.