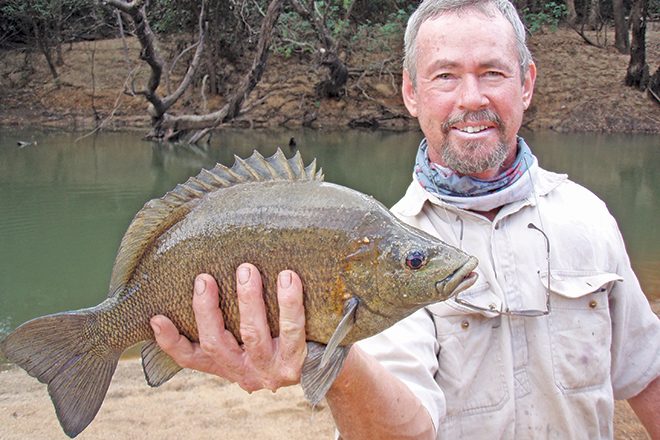 The author with a cracking Wenlock River sooty grunter.

As the latter name suggests, sooties are fish of the freshwater – inhabiting flowing streams and dams, this fish is found from northeast Queensland though to the northern parts of the Northern Territory and the Kimberley. Growing to about 50cm, they live in the shadow of the much larger iconic barramundi. underrated sooty grunter

Yet these hard-fighting fish are typically abundant and can easily be caught on lures and bait – even fruit bait – as they feast naturally on fallen fruit from riverbank trees. The major part of their diet is however small fish, crustaceans and insects.

A favourite bait for many long-time sooty anglers is simply cheese melted on a small piece of cloth, which works very well. However, the good news for the lure casters among us is that sooties will avidly take artificials – whether hard or soft-bodied lures – and are particular fun on poppers and fizzers.

Needless to say, these fabulous fish can also be caught on flies and are great fun fly fished from the sandy riverbanks which often typify our fantastic northern rivers. As with any freshwater species, edible quality can vary according to location and habitat.

I have never eaten a bad sooty grunter, and those caught in clean flowing rivers and streams are excellent tucker – firmer fleshed than barramundi and with great flavour. Speaking of firm, the flesh of the similar looking leathery grunter is super firm – leather like and virtually inedible – though I suppose it could be minced and made into fish cakes.

The distribution of sooty grunter in Queensland is quite interesting. Reportedly, they can be found in isolated locations as far south as Bundaberg but come into prominence from the Mackay area north. Prime streams for the species in northeast Queensland include the Pioneer, Burdekin, Herbert, Tully, Hull, Russell and Mulgrave rivers and any associated dams.

On Cape York, sooties naturally occur in most of the gulf rivers except Cockatoo Creek, yet are present in the Jardine River to the north. Another surprise is that they are absent from the mighty waterways of Princess Charlotte Bay – such as the Normanby and North Kennedy rivers and the Endeavour River near Cooktown, though have been introduced into the Annan.

Sooty grunter are a fabulous all-round angling fish that can be very abundant locally.