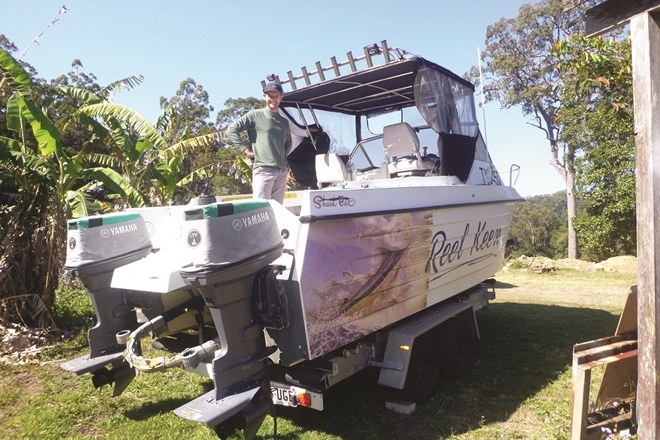 WITH November around the corner, we might be in for an early flood or good rainfall soon. I am sort of torn – I want the rain because it fills my tanks, and flushes out the creeks and rivers. The fishing in close off Noosa and Double Island is great. Shark Cat

But if we get a flood in November, the mud crabs leave the big lake and head down the Noosa River. There are way too many ‘share’ farmers down there for me to risk putting my crab pots in. Fisheries need to do a blitz and clean the thieving lowlives out – like they have at Tin Can Bay.

As you know, the run out wide of DI and Fraser Island has kicked in, though it’s still worth a try in case it’s not running that day for whatever reason. The whales are heading home, thank goodness. But the pelagics will show up soon, which means more sharks. Big storms will start to come through bringing more northerly wind, so overnighters will be harder to do. Shark Cat

On the fishing front, I did one trip offshore since coming home from Weipa. My friend Ryan Kaukiainen, who used to come out with me when he was younger and I was pro fishing, has bought his first boat. He now owns a 5.56m Shark Cat with canopy and clears, and twin 90hp 2-stroke Yamaha outboards on the back.

Ryan had to do a bit of work to the motors as they were running rough. He pulled the carburetors off both motors and gave them a clean, which made the motors run super sweet. He then changed the leg oil on both and sorted out the wiring before he fit his GPS and Furuno FCV-628 sounder, and new VHF aerial on top of the canopy to get distance at sea.Shark Cat

With that done, we did a few trips on the Noosa River and up to Tin Can Bay to build confidence in the motors. And we fit the right propellers again, as it came with two sets. The previous owner had 4-blade alloy props on it and the motors couldn’t rev out, but it came with two old stainless steel 3-blade props.

Ryan put them on and… you little ripper – it was hitting the correct revs per minute and became a totally different boat, with heaps of power out of the hole. We loaded up his 3L Toyota Hilux, hooked the boat on and headed to Tin Can Bay. We dropped the boat in and went down the bay at 23 knots – the Shark Cat purred along nicely.Shark Cat

We crossed the bar and though it was blowing 10-15 knots northeast, we were doing 18 knots straight into the wind while I was sitting down! I love Cats. We didn’t go far – only about 40km – because we wanted to see how much fuel it burned.

It took me a while to sort the sounder out – it had that much clutter coming though once the gain was turned up – and it didn’t help that Ryan left the book at home. I must say, compared to the 585, 587, 295 and 1150s it was a crap sounder to use, but that may have been due to where the transducer was put for this trip.Shark Cat

I played around with it for a long time and it was useless – the transducer was stuffed or something… I could not get any power out of it. For a 600 watt RMS sounder, it was pathetic and I barely got it sensing the bottom. We did a few drifts catching a couple of tuskfish, then we anchored up and I put out a berley trail for Ryan’s first drop.

He hooked-up to a good fish that I thought might have been a nice red emperor. He had actually landed a good snapper. With a steady stream of hussar, tuskfish and undersize fish being caught, we chipped away for a nice feed. We shifted around that area sounding out new and old spots.

It got dark quickly and because both of us were exhausted, we went to bed early. Which was a first for both of us… not having to worry about making a pay on an overnighter or finding fish for clients at night. It was fantastic! Next day we fished around the area a little more but the run had kicked in, so we worked our way back towards Double Island where things were really slow.Shark Cat

The day went so fast that we came back close off the bar because Ryan wanted to make sure he did his first inwards crossing as skipper in the daylight. We anchored up, put out a berley trail and started catching yellowtail scad on our lines, so Ryan dropped a jig down and loaded them up. He caught a few strings using livies and I used a big half slab with the head cut in half.

Within no time, we were landing good grass sweetlip and lumps of snapper. But with daylight fading fast, and even though fish were just coming on the chew, we pulled the pin and headed in. At that time, it was blowing 15-22 knots northeasterly and the little Shark Cat just ate up the sea – crossing the bar at 25 knots with no bad habits.Shark Cat

In fact, it’s the best boat of its size I have been in, and being only 18’ that amazed me! I love Cats.

Until next time, be safe on the water.

Craig has been fishing for 45 years and specialises in using bait. Fishing off Double Island Point is his favourite, followed by beach fishing. He also loves fishing Cape York around the Pennefather River.
Previous Awesome options at Agnes Water/1770
Next Mixed Gold Coast species