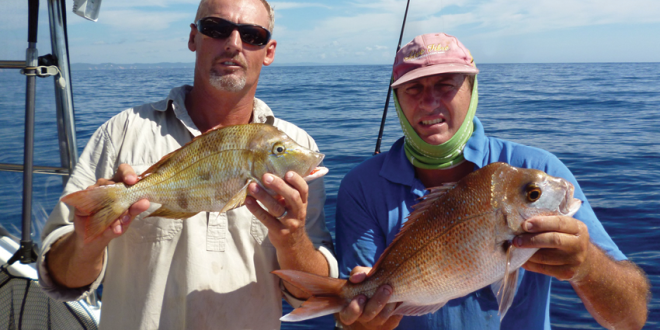 Rob Hobson and the author with a little grass sweetlip and snapper.

HI, it’s Craig Tomkinson here. So what can we expect weather wise in March? Unfortunately, more of what we got in February. Big lows in the Coral Sea will turn into cyclones and massive highs will form over Victoria.

Between them they can create huge swell on our coastal bars and strong southeasterly wind, which makes it hard to go fishing offshore. At this time of year a lot of charter operators pull their boats out of the water for maintenance.

When I had my charter boat, some years I didn’t run a charter through February, the whole month of March and into April because the weather was too wild and unpredictable.

The good news is that if there is a day or two that’s fishable, the fishing should be on fire, with both spotty and spanish mackerel being caught in great numbers on the reefs off Double Island Point.

The Pinnacles behind Wolf Rock is the place to fish. With the coastal bars so menacing and the school holiday traffic gone, I will be towing my 5m Quintrex King up Teewah Beach and launching out through one of the gutters on the north side of DI.

I will try to do a few trips chasing mackerel, snapper, tasty grass sweetlip, pearl and moses perch and estuary cod. At this time of year there should be plenty of large-mouth nannygai around.

These fish love the big trawler squid that I get off my mate Nathan Dum-schat, as well as big green prawns. The bonus is all this bait is actually suitable for human consumption, so I have a feed while on the boat too.

I will work the reefs out to about 13km offshore. I also want to try chasing the huge squid that are on the Mudlo reefs in the bay offshore from Rainbow Beach, and if it’s too rough out the front I will chase a few reef fish in there and jig my live bait at the same time.

But to make it worthwhile I’ll buy a yearly beach permit for my four-wheel-drive so I can come and go as I please. I will plan my trips around the midweek tides to get away from the crowds and I want the low tide about 9am in the morning.

That way I can hit the Noosa North Shore barge as soon as it is open, then run up the beach on a falling tide, which helps if towing. I’ll fish all day and through the arvo bite before coming back in, loading the boat and heading down the beach on the falling tide to catch the last barge home about 10pm.

Before I go I will have to rust-proof my 80 series LandCruiser again. I use a combination of Tectyl 506 mixed with diesel and sump oil. It sticks like poo to a blanket.

I then drive on a dusty road because the dust sticks to it and forms a protective barrier with no dripping oil. Rob Hobson, our mate Peter McGrath and I recently slipped out over the Noosa Bar about 6am and headed to North Reef chasing cobia.

Rob had landed a number of cobia to 13kg on the reef the week before, but as is often the case, the fish and massive bait schools had moved on. We fished for a few hours for four fish.

It was slow and one of the hottest days I have ever experienced on a boat. We then moved to Sunshine Reef where there was a great little breeze. However the fishing was still dead, so we came home about 2pm.

Thanks for a great day though Rob. I thought we would have had a flood by now, but at the time of writing it hadn’t happened. There was a small flood in Six Mile Creek near Cooroy but the Noosa River catchment only saw enough rain to make the water dirty.

Hopefully by the time this edition goes to print we will have seen a mild flood. As I have said before, this really fires up the daytime fishing on Sunshine Reef. I was talking to my mate Paul Glover, who is a skipper on Wild Thing 2, a 10m Cougar Cat charter boat out of Noosa, and he said the mackerel fired early around December but they just haven’t showed up in the numbers he expected, though they have been quite prevalent off DI.

Every time we get a big southeasterly blow the fish move on and it takes a week or so for them to build up again. Paul said they have been getting just one or two mackerel a trip. The reef fishing has been steady, with the odd coral trout and a few good size grass sweetlip coming on board as well as some snapper, tuskfish and moses perch.
Hopefully I’ll do a trip to DI soon.

‘Til next month, be safe on the water.

Craig has been fishing for 45 years and specialises in using bait. Fishing off Double Island Point is his favourite, followed by beach fishing. He also loves fishing Cape York around the Pennefather River.
Previous March the month for thumper pelagics
Next Freshwater fix from a quick flick