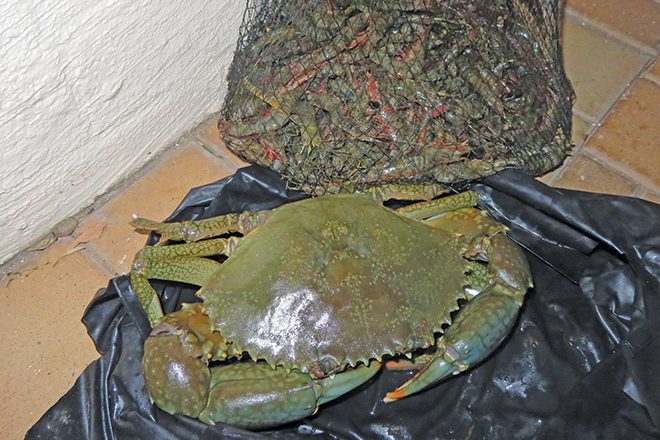 A nice mixed bag of prawns and a mud crab.

Tips for targeting prawns on foot

The banana prawn season and ‘craze’ is well known and seems to attract bigger and bigger crowds each year. And for good reason! targeting prawns foot

Catching banana prawns with cast nets in among the, for the most part, friendly and jovial mosh pits is not only a lot of fun but very addictive and means you can take home a couple of nice feeds from your session. Banana prawns are caught mostly from boats but there are a few locations in southeast Queensland, the Wide Bay and further north where you can catch them on foot. These include jetties, boat ramps and even the surf as my brother Ron has done a few times in Yeppoon. targeting prawns foot

The change of tide is a good time to avoid strong currents and run for such locations and it’s also a productive time when the prawns emerge and are more active. But the focus of this article isn’t on bananas – it’s on tiger and bay prawns, which I have targeted for nearly 15 years on and off, along the Moreton Bay foreshore in particular. targeting prawns foot

As I touched on last month, the past two to three summers have sadly been poor conditions in which to chase these prawns. Consistent strong northerly wind has blown in weed and algae, which lead to a build-up of blue green algae along the foreshores I target on foot. But ever hopeful, fingers are crossed for a return to conditions of seasons past, which will see these prawns move back into the shallows and with them the odd mud crab or three, which are also a target at night on foot.

For those who haven’t read my land-based prawning articles from previous years, chasing prawns on foot is different to the traditional method used further south in NSW. In the NSW estuaries, prawners use underwater lights and scoop nets or drag nets – which are legal in NSW – and target prawns near the entrance to estuaries on a run-out tide on new moon nights.

However, what is less well known is that land-based prawners can also catch bay and tiger prawns on foot in the shallows of Moreton Bay. These prawns can be located in very shallow water, often less than 60cm deep at low tide at night around areas of mud, sand and ribbon weed. At high tide, the prawns are a much more difficult target. This is because the water is too deep to access them, particularly in areas surrounded by rock walls.

The prawns also move around much more in the deeper water, rather than sitting stationary on the bottom around low tide. Therefore, the best time to target them is two hours before to two hours after low tide. This is in accordance with the tide rule of twelfths, where you get only 1/12 and 2/12 respectively of tide movement in these hours – search online for more information on this. The best tide in summer is a low tide around 7-9.30pm, or later if you are a night owl.

Sean caught the fishing bug bad one very cold Canberra day 20 years ago when he was bored and picked up and read Angler's Almanac by the fireplace. Since then he has filled his mind with knowledge from fishing magazines, books, the internet, TAFE fishing courses, guiding fishing charters (estuaries, beach, bay and mountain lakes) and of course 'on water' experience. He and a group of mates formed a social fishing club and soon started to share what they learnt and caught online. Sean is the admin for Ontour Fishing Australia on Facebook, which is a page that shares information, reports and sponsor giveaways and welcomes all to the site. He plans to move into blogging on his new website when time allows.
Previous Testing – Ocean Craft Posi Lift Hull
Next Christmas options for Moreton Bay anglers