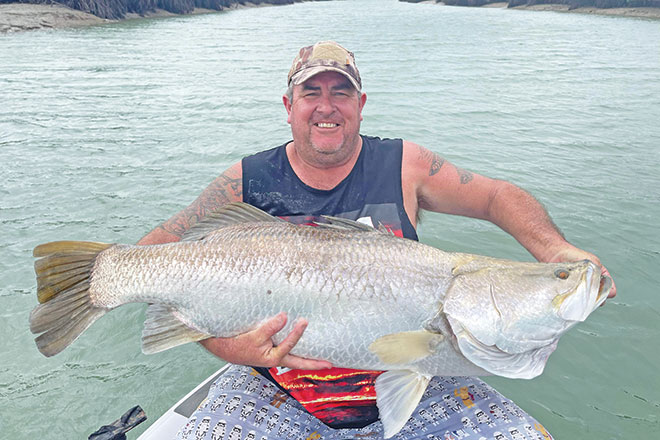 Kelly Manns with a new personal best barramundi, coming in at a massive 120cm.

The temperature is dropping, so I suppose it’s time to hibernate during the colder weather… what do you reckon? Tips for winter species

That’s a big, “Heck no!” Tips for winter species

Just because you have to put on an extra layer of clothing doesn’t mean that the Capricorn Coast action can’t be smoking hot.

First of all, some of the more prominent summer species can still be caught during June.

We have had good success on inshore fingermark, if you can get a decent weather window.

The wrecks and headland heading north from Yeppoon are the most reliable places.

If you can find isolated structure that’s less pressured up this way, that would be the best bet.

Some of the best mud crabbing we have seen has been during the lead up to the full moon of this month.

We had a cracker of a bag out session at Port Alma.

It would have to be the most reliable area for bigger models too – as in over 2kg.

If you can manage a crab or two, they generally are chock full at this time of year.

Species such as barramundi and threadfin salmon will slow a little but will still be catchable up until the first proper cold snap.

If you can locate good numbers in a school holding stationary, then down-sizing lures and working them slow is key.

If you’re a bait fisho, some live prawns bounced on their noses are a sure bet.

The first species we usually target this month are tiger squid around the Keppel Island group.

We are heading into breeding season, so the squid are generally big, hungry and angry.

There have only been a handful of times when it’s been hard to get them to take a jig.

They are opportunistic feeders, so generally if you can find them and get a jig in front of them, they will have a go.