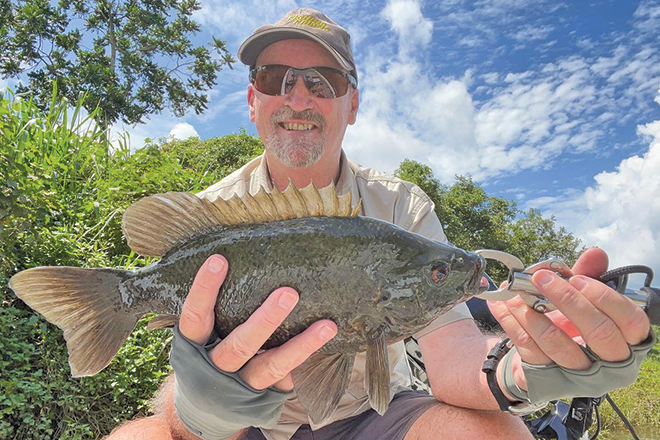 The author with a sooty grunter taken on a popper.

While much of the country has experienced a lot of rain recently, the far north has so far managed to avoid the usual number of significant rain events. Topwater redemption trip

To this end, having the right conditions to take a trip into the headwater of our local rivers have been too infrequent. Topwater redemption trip

But a nice fall not so long ago saw my local system rise 3m in about six hours. Topwater redemption trip

I managed to get out a few days after the rain with the river still falling.

The prospect of a good day on the water lay ahead and I couldn’t wait to get among them.

I was able to get a fair way up the river.

Preparing for the first cast, I’d chosen a Samaki Vibelicious to kick the morning off and was rewarded with a couple of hits early on but was unable to hook up.

At least an hour and a half later and after a few lure changes, I still had no result.

The water was clear and the fish were there because I could see them, and while I had plenty of follows, that was all… only follows.

I drifted into a section of the river where I usually pull up into a back water on one side and cast into the flats on the other.

The other side was shallow with a few features that could hold fish.

I changed over to a popper – more because it’s a safer bet, there’s no chance of a snag and it’s easier to cast upstream and control in the strike zone for longer.

First cast and I was on, and it was a solid sooty grunter.

The monkey was off my back and I soon picked up another from the same bit of water.

From that moment on I was able to land around 20 plus fish – all on the popper.

And of course, once you get some action on topwater, there is no way you are going to change over to a diving lure.

The highlight of the day was a solid 40cm plus mangrove jack taken in swift shallow water.

It had about three goes at the popper before deciding it was to be his early lunch.

I’ve only ever had one other day where I started out with a popper on my line and didn’t take it off for the whole day – it was one of the most memorable days I’ve had on the water.

I have now learned to reach for the popper a little earlier in the day.