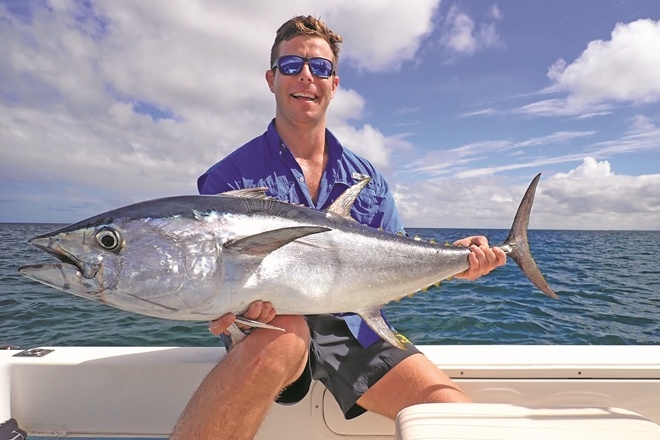 Aaron with a big longtail tuna.

CONTINUING on from last month’s issue with casting tips for tuna spinning. We need to polish up the retrieve techniques. It needs to start with line control, before the lure hits the water. When casting for tuna, never have line floating freely in the air or water. Tuna casting continued

A hit can come at any time, especially if you have sighted targets and even if they have sounded. After the cast release, you need to watch that lure, close the bail arm before it hits the water and get tension as soon as possible. If you require a bit of depth, you can let the lure sink, which should not be a problem even if you have the lure on a light tether to the rod tip.

Too much slack and you might miss that bump, or it might hamper your attempts to lodge the hook smoothly and solidly. The basic retrieve is fast, like a jet. If you see tuna chase but not eat, this is a clear indication that you have not fooled them with your speediness. This is quite counterintuitive, and many anglers say, “I am too fast, they can’t catch up!” Tuna casting continued

In fact, I don’t think that is actually possible. The fish are actually assessing if your lure is edible or not. So, don’t let them judge, just make them react. Get that handle knob gripped lightly in your fingertips and up that tempo. This is where reels with large ball knobs fall behind because it is more difficult to spin fast with this type of crank. Tuna casting continued

T-paddle knobs are the prime shape for spinning fast, I believe. You don’t want a firm grip, just enough to turn the reel. Watch that lure rip through the water – if they are not too fussy, the fish may bite if the lure is breaking surface water. Often metal lures will tumble and bounce across the surface. Occasionally this is a good thing, as it may mimic the predominant prey. Tuna casting continued

But if it doesn’t work, let the lure sink a bit before you begin. Soft plastics are often more capable of keeping depth when retrieved fast. The other retrieves are the darting or twitching styles. This can be done with soft lures or hard lures, with varying speeds and amplitudes of rod work. Tuna casting continued

It is important to maintain tension with your rod tip when using this style, as you need to feel that bite and get tension for a good strike. It takes good control of both reel and rod. If you are twitching on the horizontal plane, don’t sweep the rod back too far behind you because you can’t recover fast enough to strike if they eat early after the pause. The same goes if you’re working with upward rod motions – go too vertical and it will reduce your ability to strike. Tuna casting continued

Speaking of strikes, see you next issue for probably the most important but often overlooked part of any style of fishing.

Visit Tri's Fraser Guided Fishing Facebook page @ https://www.facebook.com/FraserGuidedFishingWithCaptainSquinty?fref=ts or give him a call on 0427 230 261 to book a charter.
Previous Rocky Point magic
Next Cape York is definitely open