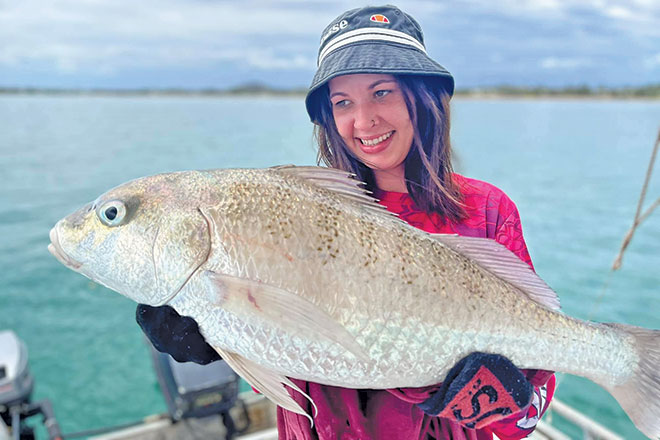 Nicky Danby and a monster grunter.

At times Moreton Bay can be one of the hardest places to fish due to its size, but once you learn some of its secrets it can be rewarding to those who put in the effort. Unlocking Moreton Bay

It is constantly under pressure due to the numbers fishing it. Unlocking Moreton Bay

And many are caught out by the wind when fishing the eastern side, making the trip home uncomfortable and occasionally dangerous.

So, if you intend to fish the bay, know what the weather is doing before you go.

There have been too many boats overturned or sunk with the crews missing or having to be rescued recently.

The northeasterly wind generally comes in at around lunchtime, while the southeasterly is more of a whole day affair, and wind over 15km can churn the bay water up.

The two zones that effect the bay are smooth waters 0.5km from land and around the bay islands, and from Cleveland Point across to Amity.

The remainder of the bay up to Skirmish Point and across to Comboyuro Point is classed as partially smooth waters, so make sure you have the correct safety gear onboard.

Anyone who fishes Moreton Bay needs plenty of patience and to learn some of its secrets to be successful, and this won’t happen on your first venture out.

This comes from finding and learning where each pelagic and reef species predominately hangs out.

It could be from the many islands and artificial reefs, even from a single bommie or shipwreck, where many places are known but others are not.

Or a patch of weed or single rock – you have to spend some time searching for these unmarked structures.

If there’s a time when the bay comes alive, its summer.

Huge amounts of bait enter the bay – from whitebait to hardyheads – and often the beacons around the Measured Mile or Brisbane Road beacons will hold yakkas or pike.

These bait schools have two ways to enter the bay – from the south passage branching into the Rous and Rainbow channels or the northern entrance splitting into the Pearl Channel across to the Scarborough reef systems and down the shipping channel.

These bait schools attract pelagics such as tuna, bonito, longtail tuna, and school and spotted mackerel.

While some of the deeper beacons north from Tangalooma towards Caloundra will at times attract kingfish, cobia and the occasional spanish mackerel on live or butterflied bait.

During winter you can catch the resident pelagics such as doggy mackerel, and mack and longtail tuna.

Find the bait and you often find the fish – no truer statement applies to Moreton Bay.

As the bait moves around the bay, the predators follow.

If any of the structures found throughout the bay don’t hold bait, the fish will move on.

However, the structures all hold bait at some stage during the tide and some pelagics – mainly school mackerel – feed in the eddies that form around the Four Beacons north and the Measured Mile.

Pelagics herd bait to the surface, even in the middle of the bay.

Other places to look are the many drop-offs along the sandbanks on the eastern side, the drop-offs from Shark Spit to the Blue Hole, from Peel Island to the entrance of the Rous Channel, from Myora to Amity, and from the bottom of Bribie Island to the mouth of the Pearl Channel and across to the shipping channel.