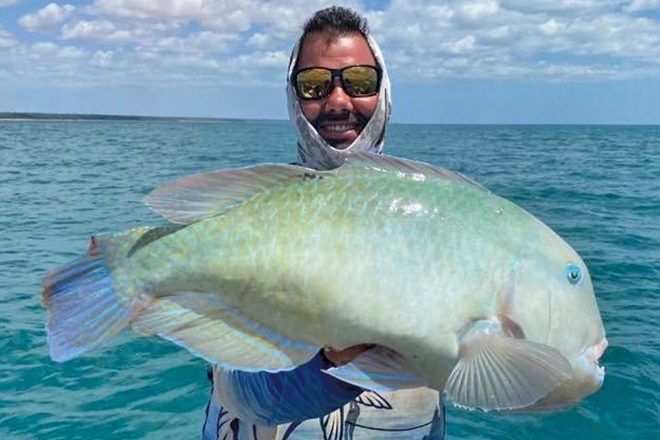 With the temperature heating up, large schools of whitebait and hardihead start moving into the bay. Pelagics chasing baitfish follow, longtail and spotted tuna will appear towards the end of December, while doggy mackerel quantities will increase too. summer Moreton Bay

Other species such as sweetlip and tuskfish turn up on hot humid days particularly, while some of the beacons towards to the top of Moreton start producing kingfish and the occasional cobia. Sharks make their presence known and so do grinner, which are worth keeping as snapper don’t mind a good fillet of grinner. Snapper numbers do decrease but there are still plenty around the bay islands and artificial reefs especially in the 40-60cm sizes, and the best times to target them are early morning and late afternoon into the evening, especially on tide changes. summer Moreton Bay

Most of the artificial reef GPS marks can be found on the Fisheries Queensland website and it’s not a bad idea to search around these reefs with isolated structure. The Scarborough reef system and the river will also start producing good numbers of snapper. The river is generating plenty of threadfin and the occasional jewfish, with live bait being found around the small bay near Luggage Point and Boggy Creek, plus the mouth of both the Bulimba and Norman creeks. summer Moreton Bay

Prawns are also on the increase with the better places to find them being the Colmslie boat ramp and Boggy Creek. Snapper are best fished along the drop-offs out from the container terminal and around Clara Rock, with plastics doing the most damage. The Bulimba rock wall is producing the occasional cod and is a good area to target bream – though don’t be surprised if you find mack tuna at the mouth of the river chasing bait schools entering the river. Bream are another option in the river with the rock wall at the mouth of Boggy Creek producing quality fish.

But most who fish the river are mainly targeting threadies, which can be found all the way up to the mouth of Breakfast Creek. If fishing the river at night, many of the lit areas along the river will produce threadfin and jew and fishing the edges of these areas is the better option. Good quality bream are found in the Pine and Caboolture rivers and around the bridge pylons that cross these two river systems. Quality snapper are also being caught around the Scarborough reef system, and the pylons around Dunwich and the rock wall at Amity are also producing bream.

Grass sweetlip and tuskies are showing up in good numbers around the fringe reef systems in the southern bay islands, with Green Island and the Wellington Point drop-offs generating better catches, but I find fishing the coffee rock outcrops around the top of the shipping channel off the top of Moreton yield more grassies than the southern bay islands. For tuskies, you’ll find using crabs are a better option and some of the plastic models on the market now are catching the occasional tuskfish – rock crabs or ghost crabs are worth a try.