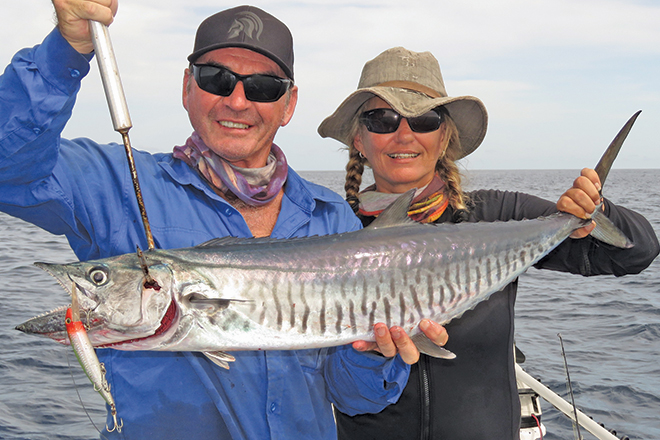 This lovely spanish mackerel grabbed a Reidy’s The Judge trolled at a reef opening. Motor and Robyn enjoyed this break from snorkelling to land a heap of shark mackerel as well.

When I first came to live on the Cape over 30 years ago, the seasons definitely seemed to be more predictable. Wild Cape York

While the actual times of the start and end of the wet did vary from year to year, the sequence of events that marked the transitions were much more defined. Wild Cape York

As the dry season trade wind dropped off and the light wind and humidity of the doldrums took their place, the storms gradually built up over six weeks or so before the big rainfalls commenced. Wild Cape York

That time frame was usually between October and December, though it could extend into January in drier years.

Then, there was the start of the dry – an event that could happen virtually overnight and anywhere between late March and early May.

There was one sure-fire sign that the potentially daily rain was at an end – the arrival of hundreds of dragonflies!

They were definitely a harbinger of the arrival of our southeasterly balmy winter days – along with, of course, tourists.

Somewhere over the past decade or so, the lines between the seasons have become blurred – the once clearly recognisable indicators are no longer so clear.

There were a couple of years when even the ever-reliable dragonflies were deceived!

Back in 2019, they swarmed in early April, only for rain from Tropical Cyclone Ann to cut the Peninsula Development Rd in early May.

A second hatching followed but it was spasmodic to say the least.

Turned out, we human residents weren’t the only ones confused by the late burst of wet weather.

Another variable – that seems to have become more pronounced with the insidious onset of global warming – is the increasingly fragmented distribution of rainfall during wet seasons over northern Australia.

Some years, the Northern Territory will cop the bulk of the downpours while the east and west coasts receive much less – and vice-versa.

This year, the anomaly has become more locally focussed, with the western or Gulf of Carpentaria coast receiving good rain through late November, December and January, while its eastern side remained unusually dry.

While the PDR closed a couple of times in January south of the Archer River, the road to the Lockhart River remained open from Weipa for almost that entire month.

To fishers living in more civilised areas, heavy rain and flooding might restrict activities for a few days to a week or so but here in the remote north, road access to even close areas can be cut off for months.

Monitoring where the rain actually falls and the state of river crossings tends to be a daily ritual to those looking to get out of town for a few days.

It doesn’t pay to get stuck because in the worst-case scenario it can mean abandoning your vehicle for a couple of months.

But the benefits of the careful perusal of sites such as bom.gov.au and having on-ground contacts can occasionally identify a weather window, when the right conditions all line up.