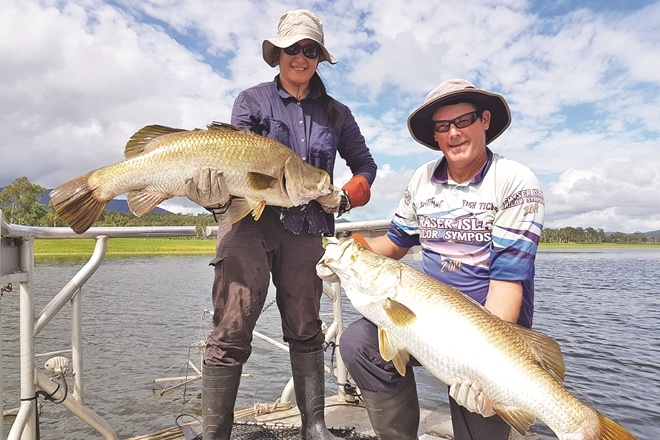 Barra structures a hit at Kinchant

Mayor Greg Williamson said this was a tremendous result for local anglers and the tourism industry. “The goals of the project were to increase structural fish habitat diversity, improve angler experiences and catch rates, and reduce the number of anglers fishing along the dam infrastructure in closed zones,” he said. Barramundi Kinchant Dam

“The fact we’ve been able to increase the number of barramundi found in fish-attracting sites by three times the amount found in open water is a testament to the success of this project.

“Mackay is known for its fishing, and these structures will allow anglers to have a more enjoyable fishing experience at Kinchant Dam by allowing them to fish in more locations while avoiding snags.Barramundi Kinchant Dam

“We believe this will be a great tourism asset to our region, as there are significant economic benefits associated with fishing-based tourism.

“The annual economic value of the Kinchant Dam fishery is currently estimated at $1.1 million per annum and with projects like this we hope to see that number increase into the future.”Barramundi Kinchant Dam

Mayor Williamson said community participation was vital to the success of this project. “Without the help of volunteers who generously donated their time to construct the fish-attracting structures at a number of community workshops, this project would not have been economically viable.Barramundi Kinchant Dam

“All the structures have been designed with durability in mind, to ensure they have no detrimental impacts on the aquatic environment, and they are relatively snag-free meaning anglers can fish right in the habitat with less risk of losing fishing gear,” he said.Barramundi Kinchant Dam

Council and the Department of Agriculture and Fisheries would also like to thank Mackay Area Fish Stocking Association, Walkerston Rotary and St Patrick’s Senior College for their contributions to this project. To view the GPS coordinates of the Kinchant Dam fish-attracting structures, download the Mackay Freshwater Fishing booklet on the Hooked On Mackay website.Barramundi Kinchant Dam