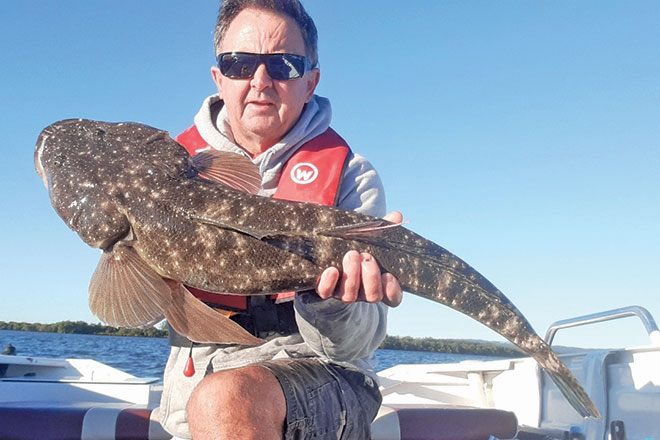 Scott with a flathead that was tagged and released in the Richmond River.

Best places to throw a line in around Ballina

Hello, I hope you all had a safe and fun filled festive season with those nearest and dearest to you. Best places Ballina

This time can be incredibly hectic with work and family commitments, so I do hope you are getting the opportunity to wet a line at some point. Best places Ballina

Even harder than trying to find the time to go fishing at this time of the year, can be finding a place to throw a line in. Best places Ballina

The best suggestion I can give is to try to head out at either end of the day.

An early morning fish or a late afternoon evening session are probably the best bets over the holiday break, as there will be less people around at these times of the day.

I guess the early bird catches the worm, which can then be put on a hook to catch a fish… well, something like that.

Anyway, let’s get on with the fishing.

It’s usually sometime around the end of January when mackerel start to show up in numbers on the close reefs.

So now is the time to start prepping a few rigs, checking your rods and giving those favourite reels a service, making sure everything is ready to go when the toothy critters do finally show up.

Until they do, we will keep chasing mahi mahi around the fish aggregating devices or Waverider buoy on live bait, pilchard or skirted lures.

If you happen to head a little wider than the FAD and can find a current line or a temperature change, there may also be a couple of extra-large models in areas of this type.

It will be worth trolling north or south along this temperature change because mahi mahi prefer to sit in warmer water whenever possible.

Skirted lures have been tempting marlin between the 32 and 48-fathom lines as well as an occasional tuna out on the shelf when the weather made it possible to run out that wide.

The current has still been fairly strong, but snapper, flathead and teraglin have all been hanging around the 32s, while pearl perch and amberjack have been playing with live bait and jigs on the north 48s.

Colour choice has been all over the shop as far as jigs are concerned, with everything from silver to pink having some success in recent weeks.

Bright coloured soft plastics rigged on 2oz jig heads have been the most productive along the 32-fathom line, while the Daiwa Kohga jigs in the 100-150g range have also been quite popular.

In the river this summer, flathead have been fairly consistent with better numbers of fish being landed between the mouth of the river and Pimlico Island.

A run-out tide has been slightly more productive for the most part, as opposed to a run-in tide that whiting prefer in summer.

For the lure brigade, small hard-body lures and 70-100mm soft plastics have worked quite well, while for anyone wanting to soak a bait, the usual white pilchard, prawns and mullet fillets have been staples.