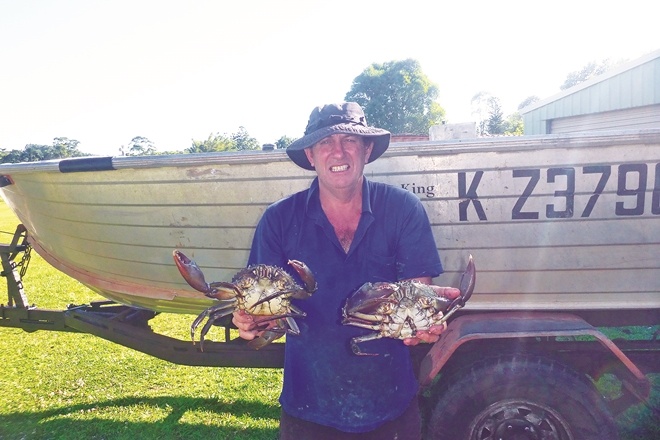 WISHING a merry Christmas and happy new year to Ben, his family, the team at BNB and the readers of this great mag and e-mag. What can we expect fishing-wise this month, with January knocking on the door?

Well, tuna and mackerel should be around in better numbers, so too sweetlip and mud crabs, sand crabs and spanner crabs – all are worth trying for. From Noosa, one of the things I used to love doing on days I got offshore, was to take out a few spanner crab flat traps and drop them in not far from where I was fishing.Christmas crabs

Between 30-40m off Noosa was good. Once the spanner crab pots were out, I’d slip back to a bit of reef and have a fish for 30-40 minutes, then go back and check the pots. There’s nothing like working your backside off to pull the pots up by hand and looking over the side of the boat to see the red glow of spanner crabs bogged on the net – just look after the undersized crabs, and try not to break any legs off when getting them out of the net.

Hopefully, we’ll start to get wet season rain by January, and if we do and the weather is not too bad, I will slip off Noosa a bit more and chase sweetlip and tuskfish in close. Fishing-wise, I’m a dud. I have not wet a line in my own boat for weeks, if not months – since I came back from the Cape trip.

I had such a great time up north this year and the fishing was so mind blowing, I just haven’t wanted to go. But I’ve been doing a bit of crabbing off and on for weeks. Occasionally I’ll get one or two a day and then none, but I find crabbing so mind-calming. The 20-minute drive towing the boat to Lake Cootharaba, putting the boat in the water, the boat ride to the pots and back to the ramp – it’s so relaxing, I love it.Christmas crabs

I’ve been using chicken carcasses from the local supermarket for bait. While the crabbing hasn’t been earth-shattering, I’ve had worse. So as long as I am getting the odd crab for my lovely wife Donna, I am happier than a pig in you know what. My old 60hp four-stroke is getting on.

It’s a 2005 model, so I thought it was time to check the anodes in the block again. Lucky I did, as there wasn’t much left of them after many hours of use. I would say how many hours, but it’s never been hooked to a diagnostic machine in the six or seven years I’ve owned it, so I would only be guessing.

Anyway, I took the five out of the motor and, before I drove to my local dealer, I looked them up online – it said they were all the same sized anodes, for 20hp right up to the 70hp motors. I got to the dealer and they said they had one and would have to order the rest in for me.Christmas crabs

They also said it’s a special type that only fits that particular motor and they would take a while to come – a week or two – and are not cheap.  I thought bugger that. I drove home and ordered online, and they arrived in a few days for half the money. I have to say, I am getting sick of being ripped off by local businesses.

Anyway, I fitted the new anodes and gave the motor a run to see if it was leaking water, but it was all good. So, the next day I put my pots back in the lake and have been getting one or two crabs most days since. I buy heaps of gear online now, all are Aussie companies and are based in Sydney, Melbourne or Brisbane.Christmas crabs

Moral of the story – I will never buy them local again either. I have been looking at buying another 80-100L upright fridge for the back of the Toyota LandCruiser 80 series – I don’t have to worry about buying a fridge slide, just more concerned about the weight in the old girl. Christmas crabs

I have a 55L Mitsubishi upright fridge which has been great, but the freezer part was not quite big enough for when the six of us travel. While I’ve been looking for a good second-hand one, I seem to always miss out as they’re sold before I can get to them. So, I came across Gecko fridges online – a 95L model featured a 27L freezer and 68L fridge, both with separate doors and they lock shut.

I bought one to try – $523.04 delivered to my door. My son Gavin ordered it on a Sunday, and it turned up the following Wednesday – three days later. Now, the first thing I do to these cheaper fridges is get rid of the 12V cigarette lighter connections and rewire it from a soldered 50amp Anderson plug, with 6mm tinned marine wire and a good fuse, to the fridge motor.Christmas crabs

I know this voids my warranty, but I have seen so much trouble caused from the inadequate contact from the cigarette lighter plugs, and doing this gives them good 12V power. I also had to do this to my 55L Mitsubishi fridge, as I would pull up to get a cold drink and find the fridge had not been successfully running for a long time, due to the plugs not making proper contact.

A friend had their whole cigarette connection melt all the contacts.  When the back is off the fridge, I check to see if any of the gas pipes are touching and are properly secured. If touching, I use Marine Sika and put it around and between all of the bits – to hold them apart so they cannot move and break off on rough dirt roads.Christmas crabs

Any screws or bolts, I take out and put a little Sika on then screw and bolt back in. It stops them rattling to bits. Now, I’ve had the fridge going in my 6x6m shed on a few hot days – it must be well over 40C in there – and it’s working just great. Its 72W motor is drawing around the same amps as my 100L Trailblaza and is running, so I am happy with that.

Time will tell how good the new fridge is.Christmas crabs

Until next month, be safe on the water and travelling.

Craig has been fishing for 45 years and specialises in using bait. Fishing off Double Island Point is his favourite, followed by beach fishing. He also loves fishing Cape York around the Pennefather River.
Previous Flat out fishing for flathead
Next Tin Can Bay attracts variety of species