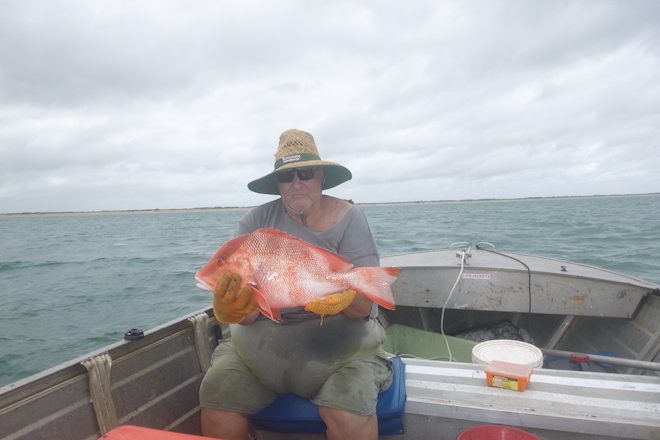 Dave with his personal best and our first legal red emperor after years of trying.

WELL, what a great couple of trips I’ve done over the past few months. The first trip was with my friend Dave Kowitz fishing up around Weipa, the second was with my family to the tip of Cape York – our first visit in 30 years. The first trip, Dave and I headed up the Cape – easily the earliest we had ever been fishing there. Fish Cape York

I must say the road was as rough as I’ve seen it since the early 1980s, with dozens of washouts 60-80cm deep across the road, all the creek crossings washed out, and mud and wheel ruts full of water for kilometres. The rain was torrential in spots as well. We were lucky – when we got to the Archer River, the water was only slightly lapping the causeway but a few days later we heard that, with the heavy rain we’d driven through, up to 8.5m of water was over the causeway.Fish Cape York

We got to Weipa, loaded up with fuel and tucker and headed off to our camping spot – as only a couple of people had camped there, we got a great spot. The first few days there it bucketed down – massive storms with strong winds and lightning as loud as I’ve heard frightened the poop out of us – we had to sleep in the front of the 80 Series LandCruiser because it was too wet to set up camp.Fish Cape York

On day three, the rain stopped long enough mid-morning for us to set up a big tarp between two tree trunks, then we set up our tent and unloaded our gear under it. It still poured with rain and blew a gale, but the cheap big tarp held… just. After a few more days, the weather calmed down and we kicked back and enjoyed the Cape. Our first fishing trip was around the fifth day and the fishing was unreal – on the first spot we anchored at we landed good fingermark and black jewfish.

Fresh fish for lunch… yum! At the start of the second week, the sun came out, the winter pattern had set in and the wet was over. We then had wonderful sunny weather for weeks, and with hardly anyone around we almost had the place to ourselves. Our friend John was catching barramundi and mangrove jack on 3” white curl tail soft plastics at will – plus heaps of mud crabs.Fish Cape York

John and I had a deal that he would catch the fish and I would fillet and skin them, so he dropped a few at our camp every day for days… it was hard to take, I tell you. We fished 20km up and down the coast from our camp for the first couple of weeks, and blackspot tuskfish were on the chew everywhere we fished. We used green endeavour prawns and trawler squid as bait, though we released heaps because we had our bag at the first few spots we found.

I scored my personal best of 62.5cm and Dave got his PB too with a 63cm bluey – a cracking fish that equalled the boat record. We caught a few nice fingermark, grass sweetlip and trout, but they were a bit harder to find. Around the fourth week, we loaded up my 5m Quintrex with 100L of fuel plus ice and tucker and headed up the coast for about 120km to a spot I had fished with my friend Rodger on my last trip.Fish Cape York

Craig has been fishing for 45 years and specialises in using bait. Fishing off Double Island Point is his favourite, followed by beach fishing. He also loves fishing Cape York around the Pennefather River.
Previous Live baiting tricks
Next Squid and schoolies from Seaway to Sundale