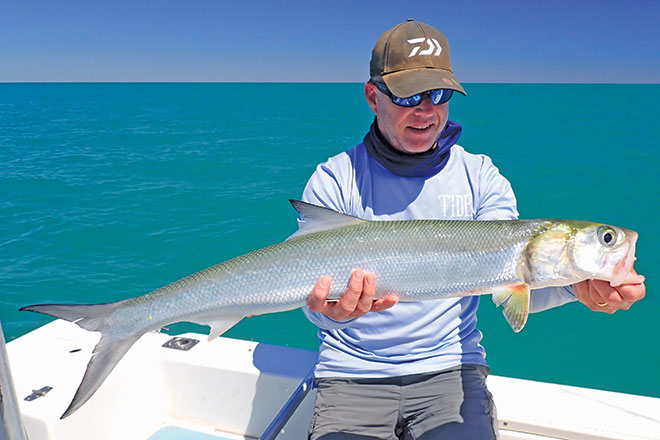 Ollie with a cracking giant herring.

Holy cow, another year is done and dusted. I hope everyone had a great holiday period with friends and family. Fish ability expectation

After a tough spring, I am looking forward to summer settling in. Fish ability expectation

A massive shout out to all my supporters – sometimes a kind word from a reader makes you smile. Fish ability expectation

But the smile gets a little more twinkle if they drop a coin or two in your pocket for a tour.

Always nice to have readers on the boat, hopefully experiencing what I scribe each month.

As I mentioned, it has been tough going.

The wild weather seemed to have put the fish down.

Plenty of bait has been around, but the predators just disappeared.

We should have good spotted mackerel activity, but even the school mackerel are thin, and we’re used to them regularly stealing lures we sink for other species.

Many days I would kill for a decent schoolie to jump on.

Mack tuna – the staple wow – aren’t really around at the time of writing.

Especially when the wind is up, and you’re stuck in close trying your best to stay comfortable and safe.

They can be frustrating at times, but I can’t complain about how fussy they are.

But what do you do?

Step up each day, go hunt and scout new areas.

If the surface activity isn’t around, we fish deep and try to find some nice activity with a sounder.

But not too much as these days it often means dodging Bruce.

Sharks are getting more and more active as the weather warms, as for every other year.

And trying to find some nice activity is exactly what I did recently with a keen young crew.

They were totally inexperienced but very keen.

And it’s been a long time since an angler said, “I am just happy to be out on a boat.”

It was totally heartfelt and genuine, and made me smile broadly.

We plugged away, spinning slugs for mackerel and jigging slow jigs for whatever would latch on.

And, as I reflect now, this was probably the antidote I needed – from the bad weather, the entitled and know-it-all anglers, constantly dodging sharks and from being a jaded crusty guide.

We eventually found a surface school but the green anglers failed to stay connected.

However, they accepted their short comings and laughed it off.

It can be frustrating watching novices ruin their chances, but these fishos took it in their stride – wanting to catch fish though not having any expectations and realising that their angling journey had only just begun.

Guides are intuitive and can feel your emotions – we read you to gauge what your expectations are.

Eventually though, a random school of trevally swam through.

And with an accurate cast and hook-up, they watched a pelagic do battle without a shark chasing it.

They got what they wanted and in exchange gave me a very nice early Christmas present.

I am feeling quite grateful that they are keen to come back, even after an extremely tough session.

In appreciation, I then pounded their bodies into oblivion with a journey home via a nasty rain squall.

Visit Tri's Fraser Guided Fishing Facebook page @ https://www.facebook.com/FraserGuidedFishingWithCaptainSquinty?fref=ts or give him a call on 0427 230 261 to book a charter.
Previous Cape Capricorn trip
Next Success fishing isolated patches of reef