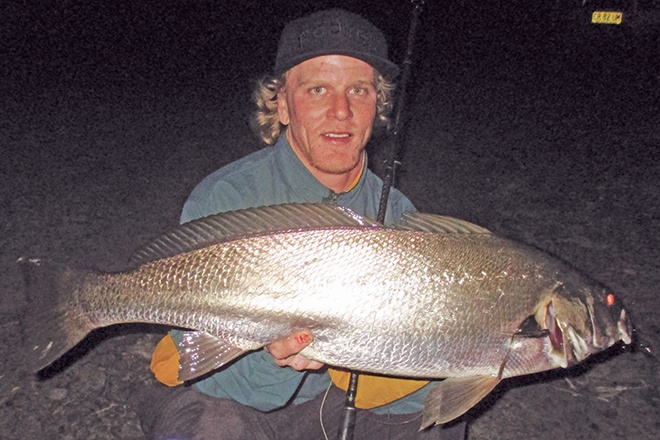 Holy moley goalie, it’s September already which means spring has sprung and winter is over for another year. At Iluka, August saw excellent catches of bream from the breakwalls, beaches and headlands, with jewfish to be had from the breakwalls, headlands and inside the mighty Clarence River, while inside the river, luderick dominated catches. flathead soapies Iluka

Actually, jewfish were that thick that even I caught one. Yes, only one, but considering I only had two casts I was super stoked – though it was a pitiful runt.
One night while Mischa went to the wall for a plastic session on a low tide, I thought I’d sneak up to the old ferry approach at slack low water for a look with an Old Dog Mutt lure in Elton John colour and was rewarded with a monstrous 78cm soapie on my second cast. It was only a pup but considering it was the first time this year I had actually fished for the smelly critters, I was quite happy with my effort and it sure did make good eating. However, my joy was short lived when Mischa returned home a while later and laid his 14kg fish next to mine. flathead soapies Iluka

Elsewhere in the river, nice fish around the 15kg mark were taken from the Collis Wall and Pinchgut on live mullet during a slack high at night, while over at Yamba the T-Piece on the breakwall continued to fish well most nights – if you can find a spot among the hoard of anglers. Lovers Point at Yamba and the first and second bluffs at Iluka have been the pick of the headlands for jewfish in recent weeks, with solid fish being taken on hard-bodied minnow lures a couple of hours either side of a low tide.
The beauty of this area of the coast is that big jewfish can be taken from the above headlands year-round, as long as you have enough swell to get a nice blanket of white water.

September is the month to start fishing the breakwalls with fresh whole octopus during a high tide in the middle of the day, as the average daytime fish is in the 18-20kg range, compared to the standard 10-14kg fish you get fishing a night tide.