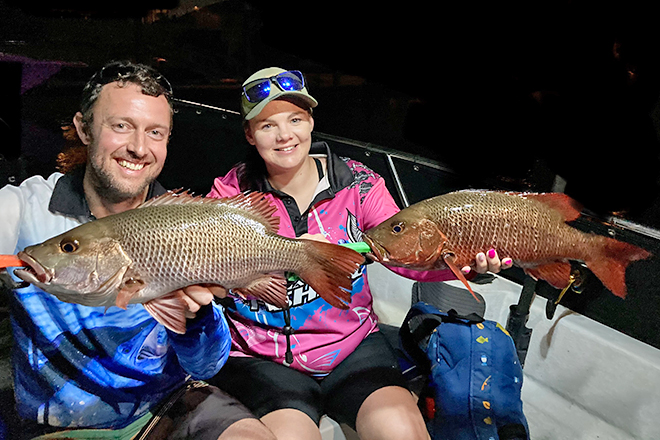 Adrian and Caitlin with some nice Mangrove Jacks caught and released with Clint from Brad Smith Fishing Charters.

Hi everyone, hope you have all had a great week. Unfortunately, it looks like the great run of weather we have just had on the Tweed and Gold Coast has come to an end, with the wind and rain looking to be set in for the majority of the week. It was great to see plenty of anglers getting out and making the most of last week’s nice weather conditions and getting stuck into some top-quality fish. Once the wind eases and the swell drops heading offshore will be a good option. Let’s check out what’s been on the chew for those keen to head out on the weekend. Gold Coast Coomera fishing

It was great to see plenty of fishos out offshore last weekend making the most of the best weather window we have seen for almost all of summer. As predicted in last week’s report, the southerly wind did the job well – cleaning and heating the water on the closer reefs off the Gold Coast and seeing some fantastic catches of quality spanish and the occasional spotted mackerel for those lucky crews chasing a feed of pelagic fish. Early on in the season the spanish had been fairly quiet but by the middle of last week, they were quite thick on the 18 and 24-fathoms reefs off the Gold Coast and the Gravel Patch too, with boats trolling lures and live bait getting triple hook-ups from large schools of fish cruising the reefs in search of bait schools. Mackerel seemed to be on the bite for the majority of the day, with good catches coming in around midday even – which is great if you got out a bit later in the day. In some areas of the 18-fathom reef the spanish were seen free-jumping when they were feeding off bait schools of yakka. Trolling hard-body lures at different depths was the most popular method to cover ground and spot schools of fish sitting mid-water on the sounder and once you located fish, slow-trolling live bait in the upper water column and using a down rigger to cover the deeper water. Dropping metal slugs into the school and retrieving the lure at a fast speed will also result in a hook-up – this method is a great rush when you hook a fish. Local fisho Paul Wilshire had a great day landing a pair of top-quality eating spanish trolling dead bait. Spotted mackerel have been a bit hit and miss so far this year – fingers crossed they start to show up in better numbers. Bottom fishing was quite successful also last weekend with some good-sized snapper, maori cod, teraglin, jewfish and tuskfish being landed on the 18 and 24-fathom reefs, with a fairly light current making fishing conditions good. Once the wind and swell eases and we get a good forecast, heading offshore will be a great option. Gold Coast Coomera fishing

With wind and rain forecasted for the weekend once again, finding shelter in one of the many creeks, estuaries or canals will be the best option, if you’re keen to try your luck. Bull sharks have been active over the past week, with the warmer humid days stirring them up. Anglers who were keen did quite well in the Coomera, Nerang and Logan rivers – landing a variety of different sized sharks, from pups to bigger models, with the bait of choice being freshwater eel. A medium-sized outfit of 20-30lb rigged with a nylon-coated wire-trace 60-100lb and a size 6-9 circle or J hook is all you need to get out and have fun. Sharks will be quite active during the day as well as night, making them a good all-round species to target while the weather is average. Chasing a feed of whiting is also a good option given the forecast and some good catches have been reported from the Logan, the Pimpama, the Coomera and the Nerang rivers and Wave Break Island will all offer good protection from the wind. The amount of rain we get may determine the best of the above spots to try. Live bloodworms, beachworms and yabbies will make the best bait, combined with a light outfit spooled with 6-9lb mono, a long 6lb fluorocarbon leader, size 3-5 ball sinker depending on current and a short-shank bait-holder hook size 4-6 to suit your bait of choice. Bream and flathead will also be on offer as a good by-catch when fishing the above areas. Gold Coast Coomera fishing

Brad from Brad Smith Fishing Charters reports it was great to have some good weather and very good tides this week. The main catch was nice quality flathead that were caught trolling and drift jigging with Pontoon 21 CrackJack and Samaki Vibelicious lures. There were also a few giant trevally around – they were only small but provided some fun light-tackle sport. With the water slowly cleaning up after a lot of early season rain, we took the opportunity to do a bit of surface fishing with MMD Splash Prawns. We caught a couple of whiting on surface but the bream were very dominant, which created some fun topwater action.

Clint from Brad Smith Fishing Charters reports that the fishing was good leading up to the full moon, then slow on the moon and the day after. Sand whiting are still around in numbers and good size on the Broadwater flats during the day and up the Nerang River at night, with the usual 40cm plus fish among the schools. Mangrove jack, squid, flounder, flathead, squire and tuskfish made up the rest of the catch this week. The weed has cleaned up with the bigger tides, but it does pay to locate the warmer patches of water to find bait and the fish following it. This coming week we have good tides for wading the flats for big sand whiting or fishing up the Nerang River with lures for giant trevally and flathead.