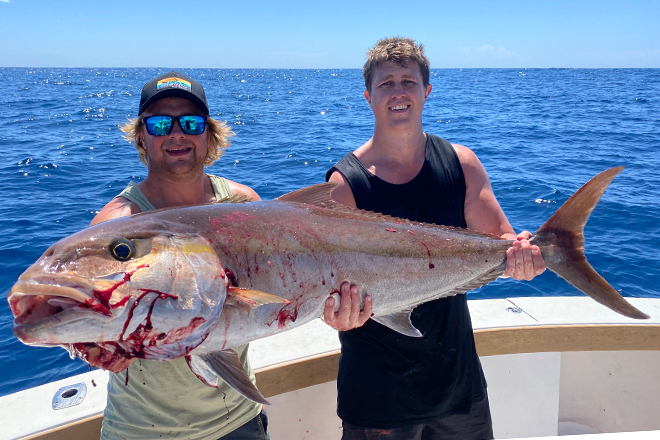 Sea Probe Fishing Charters with a beast of an amberjack they scored off the Gold Coast.

Hi everyone, hope you have all had a great week. Unfortunately, the run of good weather mid-week won’t hang around for the weekend, with a strong southeasterly wind and rain kicking in on Friday and hanging around for the weekend and early next week, limiting most fishing activities to sheltered rivers and estuarys. So far this summer, these would have to be the most testing conditions we have encountered for many years, with the relentless barrage of rain and wind not giving anyone a good chance to get out for many consecutive days on the water. Let’s have a look at a few options to try if you’re keen. Gold Coast Coomera fishing

Some quality mangrove jack have been landed around the Gold Coast in the past week, which is good news for the angers who target these feisty red fish. Conditions have not been the best to date, with rain and cool southerly changes that can put them off the bite. You can try searching in the Coomera River around the weir area, the railway and highway bridges, and the marinas and canals around Hope Island and Coomera, which can hold good numbers of nice-sized fish. There has been plenty of baitfish in these areas – a good sign. Fingers crossed we don’t get too much more rain and the cooler wind eases soon. Try casting or trolling lures along the rock walls and pontoons and around bridges – this can be very rewarding when you get that hit from a jack. Gold Coast Coomera fishing

The Tweed River has been fishing well. Also target the Nerang River, Runaway Bay canals, Paradise Point bridges, Ephraim Island, Sovereign Island and the Gold Coast Seaway. Fishing with bait is a great way to temp a big jack, and plenty of estuary cod and trevally will respond to this method. Live herring, mullet, garfish and pike are fantastic bait, also mullet fillet and Western Australian pillies will do the trick if you don’t have a cast net or bait jig handy. The Gold Coast Seaway has produced some great catches of mangrove jacks this week, along with a few nice jewfish. Schools of jack and jewfish have been frequently hanging around the north wall and the pipeline areas of the Seaway for the past couple of months in good numbers. Unfortunately, sharks are a big issue, so fishing a heavier outfit of 30-40lb will increase your chances of getting your prized catch past the tax man. Try to plan your trip around the top of the tide, then fish the run-out for best results. Always keep an eye on the swell because it can be a very unpredictable area to fish if you don’t have the experience. I would recommend waiting until the next weather change moves through and the sea settles down. Gold Coast Coomera fishing

Bigeye and giant trevally have been smashing bait schools in the Coomera River around River Links, west of the Sundale Bridge and Sanctuary Cove arm of the river this week. Other good spots to look at are the Runaway Bay and Paradise Point canals and bridges, especially the well-lit ones attracting bait schools at night, or have a look around Sovereign Islands and in the Nerang River. Surface poppers and stickbaits will work well and are very exciting ways to fish when you get a strike.

It’s that time of year to start having a look around for a feed of prawns on the Gold Coast. From what I’ve seen, fishos have been scoring a few feeds from north around the Pine River, but some of the prawns have been on the small side. Given the rain so far this year, fingers are crossed that we’ll be in for a good season if it starts to ease a bit from now on. Banana prawns can be well spread out now, so searching a few different areas will be required. Try looking around the powerlines, Rocky Point, the Logan River, Russell Island, Macleay Island, Cabbage Tree Point and Jacobs Well. I recommend using a top pocket cast net because it’s the best option. As the net sinks, the prawns are pushed into a catch pocket in the top of the net. If you feel prawns in the net kicking around, you’ll need to pull on the rope a few times which will move the prawn’s head into the top pocket. This makes emptying prawns from a net an easy task – then you can go straight back into casting at the school of prawns. Best to keep a keen eye out for other boats throwing nets, that way you know you’re in the general area. Tide changes are important when timing your trip, and top or bottom of a tide will work for most areas.

Brad from Brad Smith Fishing Charters reports this was a bit of a challenging week on the Tweed, with the upper catchment receiving a lot of rain and the causeway at Bray Park bursting over due to the consistent rain from the La Niña weather event. With some careful planning around the tides and blending the areas where the clear water meets the dirty water, we caught a heap of fish. There wasn’t the variety of species that I’m normally searching for, but at the end of the day you can’t beat a bend of the rod. Flathead of varied sizes with some nice quality fish around the 50cm mark were the highlight and an accountable number of bream that were in a line up to smash our lures. The best lures this week were my good old reliable favourites the Pontoon 21 Crackjacks trolled between 1-2.5m mark. Remember to troll with the tide when possible.

Clint from Brad Smith Fishing Charters reports that he mixed it up this week – wading for whiting on the shallow flats and drifting the channels tea-bagging some Samaki Vibelicious, Ecogear ZX40s and yabbies. The neap tides meant whiting were spread out everywhere and not schooled up over the flats, but the fish we did catch were good quality. Most days we encountered whiting in the high 30 to over 40cm. There was plenty of fish in the deeper channels between the Seaway and Ephraim Island, with some nice tuskfish and flathead. However, loads of annoying bream, tarwhine and baby squire are about, so you have to persist to get to the bigger fish. I prefer drifting while bouncing yabbies and Ecogear Isome red worms on the bottom, and jigging Ecogear ZX40s coated in Sax Scent UV prawn, and Samaki 70mm Vibelicious forktail vibes. The new Samaki colours are incredible, the strike rate I’m getting on a huge variety of fish is phenomenal. South of the Seaway and to up the Nerang River is the place to be. Good night tides are ideal for chasing big whiting from Sundale Bridge to Capri. The rivers are still quite dirty from run-off, so the best chance of scoring mangrove jack is on a run-in tide in the lower to mid-reaches. Hopefully we don’t have more heavy rain any time soon.

Gavin from Sea Probe Fishing Charters reports that out on the 50-fathom line there are still a few nice snapper being caught, with few little kingfish and amberjack, and plenty of dolphinfish on the fish aggregating devices have been lifesavers the past couple of months. A few marlin are still getting around working the bait schools, with a few mackerel showing up in close this week.