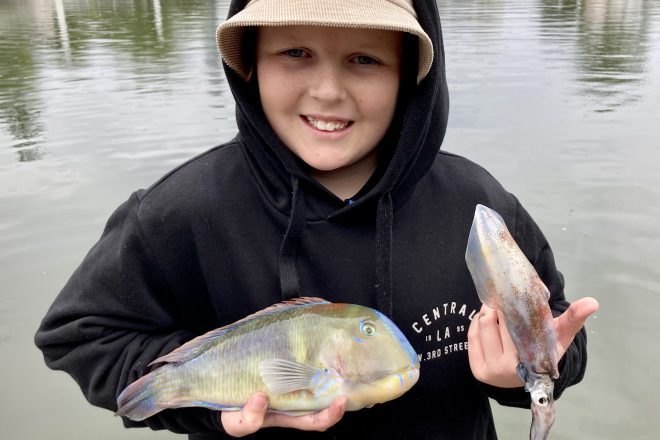 It was around this time last year that I wrote an article on arrow squid fishing on the Gold Coast Broadwater. Since then I have studied these interesting creatures and learnt more about catching them, so I thought I’d share the extra knowledge. The more you fish for them the more obsessed you get with mastering the craft – they are so much fun to catch. squid sessions

Squid grow very quickly, about 4cm a month! I release the small ones to allow them to grow bigger and breed. They only live for about one year, then they spawn and die. They are voracious predators and are most common here in the winter months. As mentioned previously, I catch many squid on Ecogear ZX vibes as a by-catch.

To find out how to catch arrow squid further north, click here!

I then started using squid jigs more, and now have a tackle box full of various coloured ones. It is true that you get what you pay for, and usually the better jigs catch more squid. My favourite jigs now include Ecogear Dartmax, RUI squid jigs, and Daiwa Emeraldas Nude jigs. When the squid are ravenous and plentiful, any lure will catch them.squid sessions

When they are harder to get that’s when the better jigs pay for themselves. Squid are colour blind, so it’s different shades and pattern that will attract their attention. They have a very strong sense of smell, so I only use a little spray of Egimax scent on my squid jigs. Put too much on and it puts them off. I spray it on the bottom end near the prongs, which results in a better hook-up rate, as they sniff and then grab it near the sharp end.squid sessions

Various colours work, but as with other forms of fishing, darker and brighter shades work better early mornings, late afternoons, on cloudy days, and in discoloured water.squid sessions

To book on a charter with myself or Brad, or if you have any fishing related questions, SMS 0432 990 302 or email fishingwithclint@gmail.com, or find us on Facebook at Brad Smith Fishing Charters.