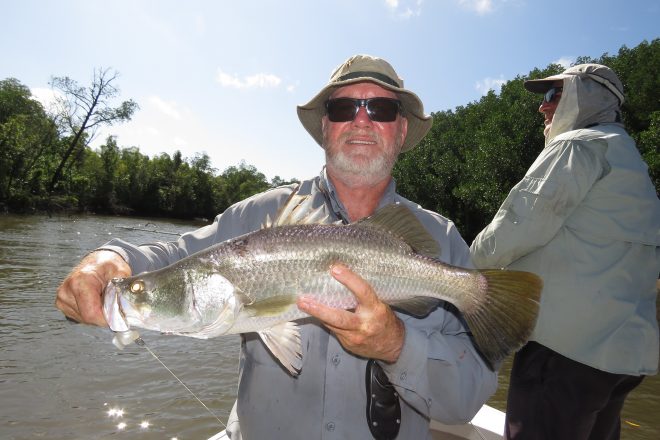 Brendan Moore shows off one of a heap of barramundi that were landed on the ‘barra tree’ in the Wenlock River.

WITH the Cape’s wet season finishing abruptly after a last burst of heavy rain at the end of April, the southeast trade winds took over from the northerly flow and were soon pumping at 20 knots or better by mid-May. This time of year is known in the north as ‘the run-off’, signified by the typically tannin stained waters pushing out of most creeks and rivers.

It’s usually a time when baitfish and juvenile prawns are forced to exit the flood plains where they are relatively protected from predator attacks and run the gauntlet downstream into the main waterways. Meanwhile on the western Cape, the nutrient-rich floodwaters have entered the shallow coastal stretches of the Gulf of Carpentaria, creating a rich ‘soup’ that brings all manner of species inshore for the annual bonanza. run-off cape

Any wonder the run-off season is almost fully booked with charter operators, with many fishers putting their deposit down a year in advance to avoid missing out. The milder, less humid weather that arrives with the trade winds also makes a trip much less uncomfortable after the sweaty days of summer. While the water temperatures remain high, the fish will keep busy even though the freshwater flows slow quickly.run-off cape

That’s why the May/June period is such a great time to visit up here. The action definitely slows once our winter drops water temperatures a few degrees. I had a line-up of visitors ready to join me in sharing what are probably my favourite months of our fishing season. The prolonged wet of 2021 has prompted some subtle changes to the overall scene, but there was still plenty of action to be found.

First to roll up was my godson, Drew Pearson from Yeppoon, a fisho who started his career while crawling around in his old man’s boat eating stray pilchards that had been shaken off the ganged hooks when his parents were landing mackerel. With a pedigree like that, it’s little wonder that he can keep up with the best around, including his retired godfather!run-off cape

Truth be told, I’m still not too decrepit to enjoy the challenge, even though I usually come off second best. We enjoyed a wonderful week, including a couple of epic days targeting the bauxite reef bommies down around Thud Point and Norman Creek. I don’t allow bait in my boat these days, but we found plenty of takers for the soft plastics and slow pitched jigs we offered.run-off cape

Sharks were sometimes a problem but, in an interesting turn of events, we seemed to find good fish whenever large sharks appeared on the side scan. The trick was to land any hooked fish quickly then leave them biting before the sharks became too aggressive.run-off cape

The next party of mates was forced to camp outside the TMR office in Mareeba to obtain a permit to travel the Peninsula Development Road, as it was still officially closed due to the late rain. They duly arrived about a week late, but were lucky enough to be able to extend their campground booking to make up for the lost days.

It’s no secret that I love my saltwater fly fishing, and one of the crew, Brendan Moore, was keen to join me in flinging some fur and feathers at whatever we could find.