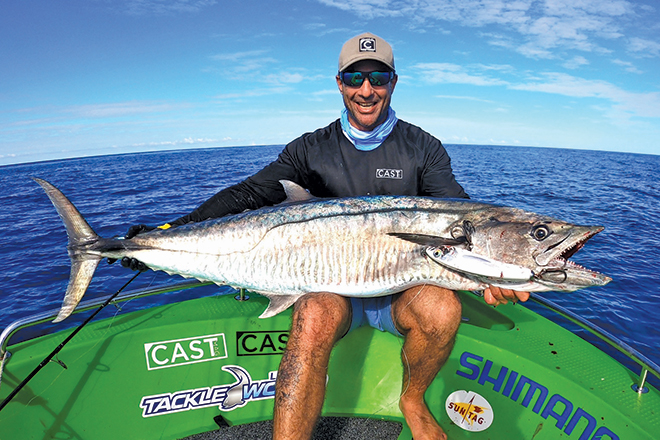 There is no denying the rise in popularity of topwater lure fishing in recent years, with many social media influencers showcasing how exciting and productive this style of fishing can be. Heavy topwater tackle 101

Topwater is all about the strike. Heavy topwater tackle 101

When a spanish mackerel suddenly launches on a lure, sometimes up to 10m high, or when the water erupts with the shear violence of a giant trevally strike, the instant excitement that shatters the tranquillity gives a rush of adrenaline like no other! Heavy topwater tackle 101

From GTs and extra-large spanish mackerel in the north to giant tuna and kingfish in the south, there are plenty of opportunities along our coastline to get in on the action.

There are three key factors to look for when identifying possible pelagic habitat.

First, there needs to be a lot of current – whether it be oceanic or tidal, current of about 1.5-2.5 knots is ideal.

Next, there should be some kind of structure for the current to hit and create a ‘pressure edge’.

The final telltale sign to look for is deep water near the structure.

Tick those three boxes and it’s time to start casting.

When approaching a piece of structure, it’s important to move towards it slowly and get a good bearing on the direction of the current.

Then approach the structure from upcurrent and start a drift line several hundred metres away from the target pressure edge.

The pressure edge will be the leading face of the structure on the upcurrent side.

As the current collides with the structure, it creates turbulence and pockets of high and low-pressure water.

Schools of baitfish become trapped in these pockets.

Pelagics and large predators will be patrolling the deeper water surrounding a piece of structure looking for opportunities and weaknesses in the bait schools.

That’s where we want to be casting.

A good spin reel with up to 20kg or more of drag pressure is ideal.

The Shimano Saragosa 20000 is a great starting point that won’t break the bank and has proven itself to be a big fish stopper.

A heavy rod rated for at least PE8 line and around 8’ in length will have the backbone needed to launch lures that weigh up to 200g and put plenty of pressure on a fish, while also having the length required to work a proper action into the lure.

Leader breaking strains of about 120-150lb will give maximum abrasion resistance while still being supple enough as to not hinder the action of the lure.

A leader of 3-3.5m – or 2 arm spans – will allow enough length to have your casting finger holding the leader and not the braid when casting.

This will stop the braid from fraying and becoming weak over time.

Leader should be attached with either the FG knot – fine grip knot – or the PR Bobbin knot.

Whatever your knot of choice, it must be able to pass through the guides smoothly, frequently and without deteriorating in strength.

A 9mm solid ring is tied to the end of the leader with a Palomar, AG Chain or similar heavy-duty knot. The lure is then attached to the solid ring via a split ring.

Many anglers prefer a large swivel in place of the solid ring, however in my opinion, line twist is never an issue to the extent where a swivel is needed. Also, a swivel adds an unnecessary weak point and will hinder the action of most stickbaits. A good pair of casting gloves are a must! A small length of fabric medical tape wrapped around the tip of your casting finger under the glove will add extra protection when casting for prolonged periods.

Nearly all fish species are influenced by the moon in some manner. This is particularly true in respect to the feeding patterns of large pelagics. Pelagics will feed with varying degrees of aggression and frequency depending on, not only the monthly lunar phase, but also the position of the moon in the sky throughout the day.

Moon overhead, moon underfoot, moonrise and moonset are the four ‘bite periods’ of the solunar cycle.

When casting topwater, anticipation always rises around the solunar bite periods – they are definite periods of the day when casting and focus should be intensified.

While there may be more efficient means of targeting most of the species you’re likely to encounter when throwing large topwater lures, with topwater you’re more likely to entice a bite from that bigger fish in the pack.  It does require more effort and energy than other methods of fishing, but the rewards are well worth it!

Get out there and have a cast… but be forewarned, topwater is very addictive!