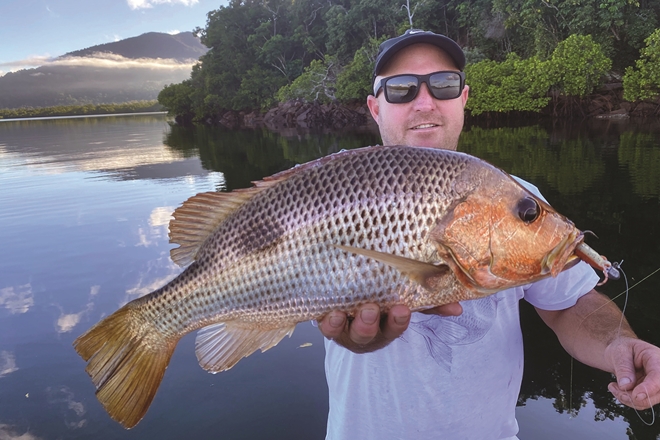 A lovely Hinchinbrook fingermark taken on a 3” Gulp Shrimp.

Hinchinbrook in a tinnie – part one

OVER the past few years I’ve been on several fishing trips to Lucinda at the southern end of the Hinchinbrook Channel in a tinnie. I’ve done these trips at different times of the year to try and find out what works best. This year my brother Chris came on the trip we’d planned for the middle of August.

My dad lives in Townsville, so we flew in there with bags full of lures and a tube full of rods. There were a few clothes mixed in somewhere too, but they were at bottom of the priorities when going to Lucinda to fish. I’ve been relatively lucky over the years with weather and this trip was no different, with a light southeasterly wind forecast for the four days we were going to be there. Hinchinbrook Channel tinnie

We arrived at Lucinda on Thursday at around lunchtime and got the old man’s tinnie into the water then and there. We went straight up the channel to look for fingermark, but the tide was a bit slow. One thing I’ve worked out about fingermark up here is that they love current and lots of it.

The best sessions I’ve had have been when it’s difficult to get a lure to the bottom. The tide had just started running in, so we jumped on Google Earth and picked a small creek to cast lures into the snags on the run-in tide. We planned to fish a few different places on this trip, so that for each new trip we would have more spots to choose from. Hinchinbrook Channel tinnie

This little creek ended up being good, and we pulled a few nice mangrove jack and Chris got a nice grunter off a big fallen tree. Plenty of cod got in on the action as well. The standout lures were prawn imitations rigged snagless and with minimal weight. I tried a variety of different plastics but the prawns outfished everything by a mile.

We got a couple of brutal smokings in this little creek as well, though before we realised it was time to head back to Lucinda for a barbecue and a few beers. The next morning was a glass out and the line-up at the ramp was ridiculous, so we decided to head to Fishers Creek and put in there. This ramp needs a bit of water to get the boat in and out of, and even though it had only just started running out, the tide was already low when we got there. Hinchinbrook Channel tinnie

Dad didn’t want to get stuck there all day, so he drove the trailer back to Lucinda and left us to find a few fish. Once again, the fingermark spot was very slow – even the trevally and tarpon weren’t chewing. I ended up downsizing to a 3” Gulp Shrimp on a 3/8oz head, and finally landed a nice fingermark.

This was followed by a little giant trevally and then it went quiet again. We travelled north to look at some drains around Benjamin Flats, but the tide was a little too high, so we killed time casting lures at rocky points for a heap of cod until the tide started coming in again.

We put a few pilchards in the Esky this time, for something different. The old man’s tinnie is pretty basic, with a 2-stroke and no electric motor, so casting at snags when the afternoon breeze picked up was a bit tricky. We found a likely looking snag and anchored just upstream from it. Hinchinbrook Channel tinnie

It didn’t take long for the resident pikey bream to show up, with one fish per bait coming over the side. Pikey bream generate a lot of activity and make for a great berley trail when they chew up pilchards. This attracted fish from other snags and it wasn’t long before a school of jack got in on the action. Hinchinbrook Channel tinnie

We landed around 10 jack and a bunch of decent cod as well. In tight country it was brutal fishing and a heap of fun. A few of the better fish had us in the snags fast and it took quick rod work and patience to get them.

We left the fish biting in the creek and bashed back through the chop to get home before dark for a hard-earned drink and a feed.