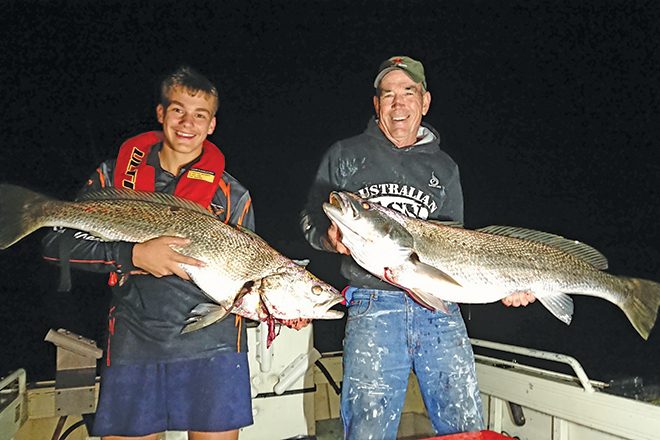 Toby and Gary with a double on reef jewfish.

Occasionally, fishing can be a humbling experience. I recently came back from an afternoon session on the riverbank. I collected some live herring and fished them in a reliable spot as the tide bottomed out. The flathead I was after didn’t eventuate and all I caught was a lone bream. Rethinking experience humbling

As I walked back to the car, my friend was walking towards me with his children on their way to fish. He tied a lure on each of the kids’ rods and they got to casting. His five-year-old son was casting a small diving minnow and wow, could he cast it. The retrieve however was fairly slow and boring, and I gave him no chance of getting a bite. Rethinking experience humbling

He claimed he’d had a few strikes over a series of casts, but I didn’t take him seriously. I said my goodbyes to them and as I began to walk away, the young angler declared he had hooked up. And sure enough, as I turned around he was fighting a fish and calling to his dad to help because he had a monster mullet on the line. The fish put up a good fight and turned out to be a fairly decent tailor. Rethinking experience humbling

I walked away chuckling to myself for being a fool and thinking the kid had no chance. Kids are extraordinary – you take them fishing and most times they will surprise you. Like I said, it can be very humbling and makes you rethink your years of fishing knowledge.

Over the past month mangrove jack put on a bit of a show and then went quiet again. They should be in full swing by now though, so if you are keen to get one maybe hit the water before we get smashed with holiday makers over the Christmas break.

The number of boats around these days is unbelievable. A couple of Sundays ago, the forecast was good and by 5.30am the line up at the ramp meant about an hour to get the boat launched. Vehicles with trailers were parked on both sides of the road halfway to town. Quite amazing considering how poor the fishing has been – the only thing running at the moment is the current. I hate to think how busy it’s going to be over the holidays.

Mud crabs haven’t hit overdrive yet, but they usually put on a bit of a show in December – in time for Christmas lunch. Surprisingly, those that have been potted have been fairly full, which is good.

Flathead have been the saviour for the river fisho this month because even the trevally have been a bit patchy. In the Brunswick River, flathead have spread throughout the system from the mouth to Mullumbimby. Live herring, plastics and vibes are the go-to bait for lizards, but if all else fails don’t underestimate a good quality white pilchard.

It’s been a great season for flatties in the Tweed River and they have spread right through the system from the mouth to Murwillumbah. They seem to have spawned a little earlier this year and the big mummas arrived at Murwillumbah even before the herring got there, which was a bit unusual. There was plenty of food for them in the form of shoals of tiger mullet. December is also time to get up that way and chase the bull sharks that take advantage of the tiger mullet schools.