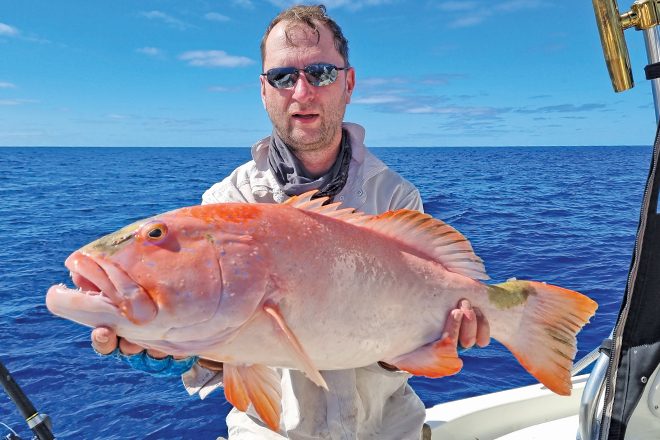 Despite the grim weather forecast for the start of the week, most members headed north early on the Saturday hoping for a Sunday pre-fish session before kicking back for a few days waiting for another window of opportunity. Sunday turned it on with most boats at the ramp at about 4.30am, eager to be first to their secret spot. Seventeen Seventy Trophy

Karma Krusin lead the boats out of the creek in the dark on a lowish tide and headed for the Boult area, while the rest of the fleet headed north. The wind wasn’t too bad with the occasional white cap but the residue from the gusty days prior kept speeds down. Terry tried a few spots on the way to their traditional 60-70m grounds wide of Boult but could only manage a lone trout, a few reef fish and two big slimy catfish. Seventeen Seventy Trophy

Pressing on and heading wide, they were met by 2m swells outside the reef that saw the accompanying boats of Darren and Warwick disappearing in the bottom of the troughs, bar the roof mounted aerials and rods. Once out, they prospected over a wide area for several hours with very little result, so they headed back in closer to the Bout area. Seventeen Seventy Trophy

Finding some new ground, the lumps held good fish and it wasn’t too long before the box had a nice colour to it. Dale found a new secret trout bait and was putting them in the box one after another, much to the disgust of Craig and Terry who could only manage the odd tuskfish and redthroat emperor. Dale soon passed on a secret bait and Craig started nailing trout almost instantly – still don’t know what the bait was though.

A few longer drifts found more decent lumps and the box started looking reasonable. A double hook-up of cobia with another big model swimming around the boat had the fishos super excited and busy. A few more drifts over the paddock on the way home topped off the day with a few nice grass sweetlip and another trout for Dale.

The next four days were restricted to socialising, trailer repair and more socialising due to the weather. Friday was looking good and the majority of crews planned to make the most of it by doing an overnighter. Boats arrived at the bar at around 6am expecting to have to wait for a bit of water but the deeper dog-leg northwest section of the entrance proved to have good depth.

Most headed to Fitzroy with a fairly pleasant wind though a confused lumpy sea that was enough to keep the speeds down again. The Sea Ya crew of Bruce Sparkes-Carroll, Stefan Slomka and his brother Martin decided to do their own thing and head out wide for change. On the first drop in 65m the fishing was hot, as long as hussar were the target.

They sounded around and eventually found a decent bump that produced a few nice maori cod. Gear failure on Stefan’s part put paid to one of the better fish and he was left wondering what might have been.