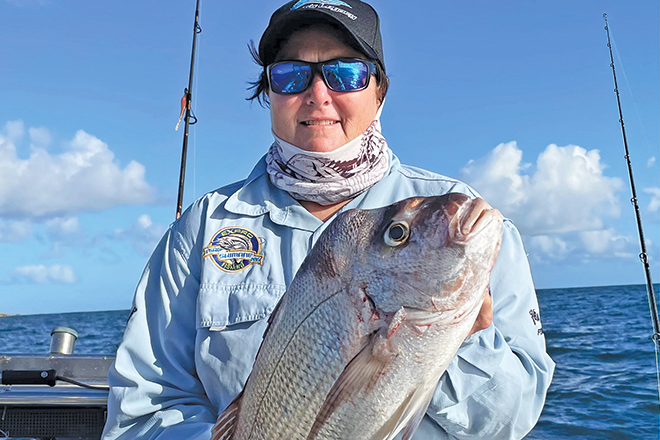 Helaine with a snapper off the Cape.

After spending his month in Tassie and watching the rain pour down back home, Rob Schomberg knew he hadn’t missed any fishing opportunities while away. Shallow water shines

Salty had been sitting for months and he had only just finished giving the boat a wash and run of the motor when he got a call from Helaine Wilesmith. Shallow water shines

H had not been on the water since September and, after selling her boat Amity, she was keen to get out for a deep drop and pop the cherry on the new Shimano electric reel that was gathering dust. Shallow water shines

A plan was hatched to go for a look and with no other takers from the club, they headed out on Sunday morning with a bit of light in the sky so as to look out for floating debris.

They got to the Cape when the Furuno decided to play up.

It would shut down then start, shut down and so on.

Then, to make things worse, the VHF decided to pack it in.

Rob headed to the cabin to check connections and fuses and, for the first time in 40 years, started to go green in the stuffy hot cabin – all the electrics were good but he certainly wasn’t.

In the meantime, H had thrown out his plastics rod and got slammed and was demanding the net.

Rob was trying to hold on to his stomach contents while managing to land a nice snapper for her.

They had a few more drifts, got one more legal and five unders in the very dirty water before they decided to move, now using the backup Garmin unit.

They headed to the containers to see if it was better out wide because it was a bit rough.

When close, they found a boat spot-locked on the best containers.

No point in annoying them, so they moved on to the Kyogle.

Spot locking, they could see a good show but no takers, apart from a rather angry eel.

They headed northeast to various marks in 220m but after going through quite a few and finding nothing, it started to look as though there was no one home, and the bait coming up untouched confirmed it.

They continued looking and finding nothing, so decided to head closer in to the 100m line.

The shows were good but after a few missed hits, they moved back to the Cape in 30m of dirty water.

First plastic down was slammed by a nice snapper and another two followed in quick succession.

A floated pillie resulted in a green jobfish for Rob and when H went to bait, she was pleasantly surprised with a nice grass sweetlip, followed by a spangled.

With the afternoon sea breeze well up, they called time and realised sadly they had covered 100km for nothing.

If they had stayed put at the Cape, they most likely would have bagged out, but that’s fishing.

And we won’t mention how much it was to replace the electronics.

Bruce Carrol also snuck out for a deep drop and battled current all day, though did considerably better with a bar cod and a bass grouper.

At least they were on the water, I suppose.