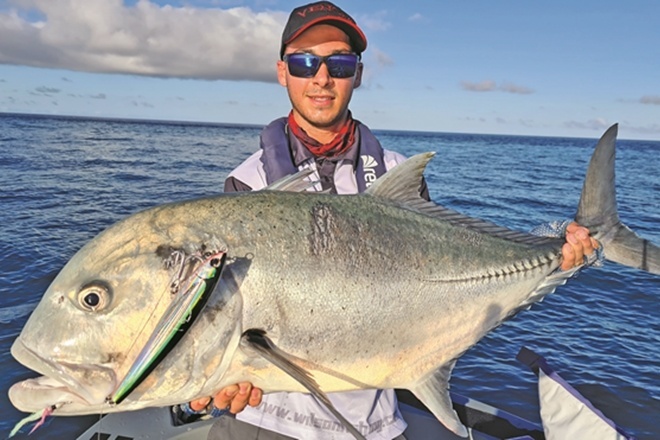 Chasing giant trevally on the pressure points of reefs with Zerek Zappelin stickbaits was great fun and accounted for a huge amount of them over the trip.

WELL, it’s been a while between articles but after a crazy 2020, which I’m sure many experienced, I’ll endeavor to try a little harder this year. I did manage an epic trip to Swain Reefs in my 7m boat and followed this up with a drive to the central Queensland coastline near Yeppoon, where we fished from the Shoalwater Bay area for a week. Testing Swain Reefs

The fishing was exceptional, and we filmed both trips – which will be available on DVD and digital download in coming months. Speaking of Swains, I was lucky recently to be invited by Wilson on a 10-day trip to the Swain Reefs on board Big Cat Reality Fishing Charters. This was a product-testing exploratory trip into the middle and upper regions of the reefs, where we would self-guide our way around 25-plus different reef systems.

We had Mark Berg and winning member Phil on board filming a TV show, and also a great bunch of talented fishos to share the trip with. Being a 10-day trip with six days fishing, it would be impossible to cover the highlights over one article, so I’ll break it into two or three parts so I can go into a little more detail. The 30-hour trip from Bundaberg was a little rough, but we woke to glorious conditions for our first day of fishing around East Cay.Testing Swain Reefs

For this trip, I was teamed up with Dane Radosevic from Fisho’s Tackle World Hervey Bay, which was great as we had similar ideas and plans of what we wanted to achieve. We headed off in one of the 4.3m tenders supplied by Big Cat and went looking for pressure points, where the current hits the front-leading edges of the reefs. This is where bait often congregates and giant trevally love to inhabit.

It didn’t take long to find what we were looking for and in no time at all we caught a few nice GTs, got busted up and had an awesome aerial strike from a spanish mackerel, all on 220mm Zerek Zappelin stickbaits. When the topwater action slowed up, we got into coral trout on Mustad Wingman jigs before heading to another reef in perfect glassed-out conditions. The next reef looked even better and we could see bait being pushed up against the leading edge of the reef and predatory fish feeding on them.Testing Swain Reefs

The next hour was insane and a moment Dane and I will never forget. We had GTs and mackerel swimming around and under the boat in crystal-clear calm water. Dane nailed a nice GT on the second cast and it wasn’t long before the 220mm Zerek Zappelin stickbait I cast was smashed on the surface by a huge GT. I had the Wilson Venom PE 8 Popping rod loaded right up – as the fish pulled plenty of line against a heavy drag, I had a feeling it was a special fish.Testing Swain Reefs

When it finally hit the surface, we saw its true size and celebrated with cheers and high fives. I was well and truly worn out, with zero wind it was easily the hottest temperature we’ve ever fished in, so catching big GTs definitely took its toll. Once again, we moved to another reef to get a little air flow and to find a fresh spot to fish. More GTs were caught on Zerek Zappelin stickbaits and also a few coral trout around the reef edges on Mustad Wingman jigs and Zerek Live Shrimp lures.

One trout I was pulling up was eaten by a GT under the boat, which made for a long fight on the lighter tackle I was using. Unfortunately, a shark took a bite out of the GT directly under the boat before I could land it. Talk about a fish eat fish moment. The next day we fished another new location and I marked out an area I thought would be suited to red emperor. It was a fairly large area of flat-looking country in deeper water of around 60m or so.Testing Swain Reefs

After catching trout, red throat emperor and green jobfish around the main reefs, we went sounding in our chosen area. A couple of hours later, I found a great show on an isolated rock and was confident we’d found what we were looking. I had caught a hussar on a jig earlier and decided to take the fillets off it and drop it down on a paternoster rig. Dane opted to use a Mustad Wingman jig and it wasn’t long before both of us were hooked-up on a few big fish.

Unfortunately, Dane pulled the hooks on his fish but soon hooked-up again only to be sharked not long after. I was still pulling mine up when a shark bit its tail off under the boat, but I was still happy we’d got the majority of the fish back and confirmed they were indeed nice red emperor. That’s where the fun stopped however, as every red we hooked got eaten by sharks and after several attempts we decided there was no point wasting good fish and drove away from them.Testing Swain Reefs

The afternoon was spent chasing trout, redthroat emperor, green jobfish and coral cod on plastics and jigs around the reef edge, but once again the sharks found us and ruined all the fun. The first two days of fishing was crazy on so many levels and this would continue for the remainder of the trip, which I’ll cover in Part 2.