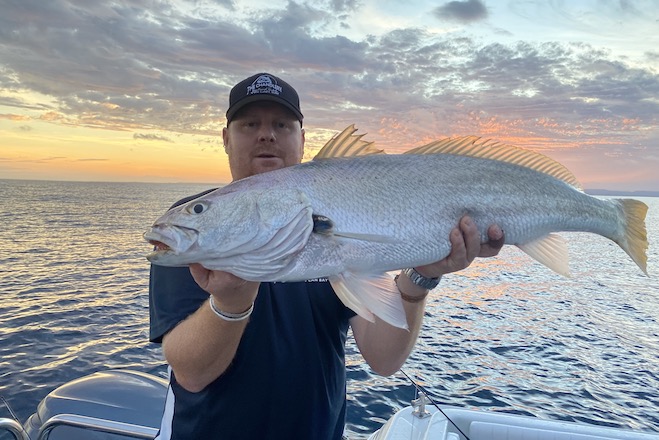 The author with a nice jewfish that ate a Nomad Vertex Max 110mm in Disco Bits.

Tin Can Bay a winter wonderland

G’DAY, I hope you have all been out getting those rods bent, and with the school holidays I’m sure many of you would have had a little spare time to get out and catch a feed.  Let’s tuck straight in to what’s been getting caught, or what you could possibly go and target over the next couple of weeks. The fishing this past month has been damn good for most fishos to be honest. Tin Can Winter

Inshore reports of reasonable catches of the bread of butter species were coming in thick and fast. Winter whiting have been showing up and seem to largely be in the 20cm range. The squid are everywhere in the deep water in the passage, but it does pay to move around if the bite is slow.Tin Can Winter

Go hit the power lines and after two or three drifts, move down to the old barge for a drift or three and, if that is not doing it, try the Carlo Island leads and if that’s not working either, it’s time to try something different. You could get up on the flats out the front of Teebar and hunt around for a few. You might be surprised what you might find on a flood tide.Tin Can Winter

The creek mouths have been holding nice flathead lately and the last hour of a run-out tide and the first of the push-in have been key. Vibes in the 75-95mm have been winners along with small micro jigs such as the Palms Bit Arts Miniature Dax in 10g and 14g. Jigs have also been producing great golden trevally. At this time of year, the creeks in the straits seem to have an influx of trevally with golden and diamond being the main prizes for most fishos.Tin Can Winter

They make for great photos and when they get up to the around the 65-75cm range they’re a ball of fun on the silly string. We tend to target them on the start of a run-in tide and fish light for them – 6-10lb braid, even down to 10lb leader if they’re playing hard to get, but not much heavier than a 20lb leader. It will also pay to keep a close eye on the sounder, particularly your side scan.Tin Can Winter