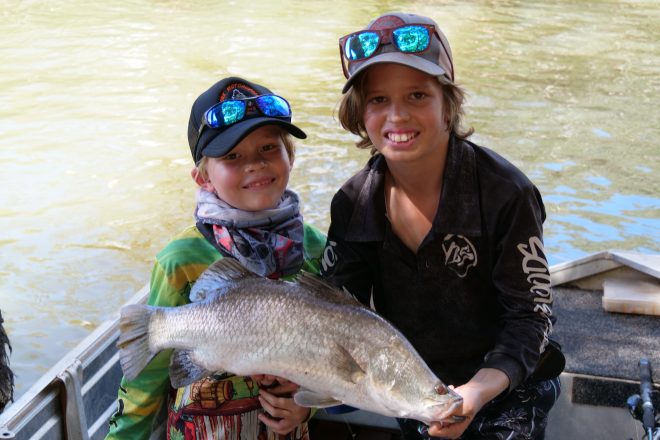 Cousins Chastyn and Ryan with a nice Wenlock River barramundi.

Camping and cooking on the Cape

WHAT a fantastic time of year on the Cape! The mid-dry season – or ‘winter’ – here is magical, with mild weather and perhaps an occasional cooler night inland. So far, the ubiquitous southeast trade wind has been relatively light. At the time of writing, we hadn’t had enough ‘winter’ to really slow the barramundi bite down, and with August upon us, perhaps it won’t. Cape camp cook

Reports of great captures are coming in from all over the region – from Rinyirru (Lakefield) National Park in the south to Port Stewart near Coen and the broader Weipa area, and through to Jackey Jackey Creek and the Escape River near the Tip. Camped beside Wenlock River recently we enjoyed great fishing and it was interesting to see how the bite varied according to the moon phase.Cape camp cook

As I’ve so often seen, barra develop lock jaw around the last quarter of the moon then come back on the bite with the advance of the new moon. The moon phase didn’t appear to affect sooty grunter, which seemed to have a more consistent appetite, except perhaps in cooler climates. What was also interesting to note was the pronounced ‘nighttime’ bite.Cape camp cook

Most nights – from dusk until kookaburra dawn – saw greatly increased fish action, with much splashing, swirling and frequent explosive barra boofs that couldn’t be missed. In fact, at times it was difficult to sleep waiting for what was going to happen next!Cape camp cook

While a variety of lures produced, the Jackall Squirrel lures were unquestionably the top performers. They had just the right action and size to entice both barra and sooties to chomp and did the job beautifully. We were camping with our families from Weipa and all had a cracker time – not just with fishing but with also exploring, enjoying top camp tucker and experiencing the great nature around us.Cape camp cook