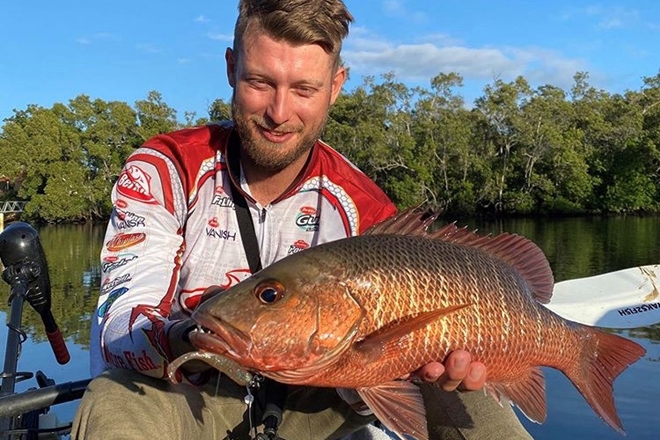 Josh with a jack caught from his kayak.

WINTER has flown by and we are already almost into spring, though our winter species here on the Gold Coast will still be in full swing. Here in Queensland we have just experienced our first year of the snapper and pearl perch closure, which was in effect until August 15, meaning you could not target or keep either of these species until after this date. Winter species Gold Coast

This gave the fish a good chance to do what they do best without constant fishing pressure and make for a better back end of the season. Inshore fishing has been a bit of a hit, with good captures coming over the school holidays and hopefully many to come. The Broadwater has been a good place to target flathead, big bream and tailor, with the odd showing of summer species including mangrove jack, trevally and giant herring.

Squid fishing has become increasingly popular of late. Due to the lack of serious rain, the high tides have seen very clear water in the Broadwater, meaning prime conditions for squid. One thing commonly spoken about is the location of squid.

I have found them along rock walls, over weed banks, in timber, up shallow and down deep. The best bet is to give them all a go and if you get lucky, continue fishing that type of terrain. In the Broadwater of late there has been an abundance of arrow squid in deeper water of around 3m. Winter species Gold Coast

Squid jigs in 3.0 size seem to be most effective. I choose jig sizes that align with the depth of water I’m fishing (2.0 in 2m, 3.0 in 3m and so on), as squid will always go for a jig as it falls rather than on the retrieve. The slower the fall, the more chance you have.

Another thing I like to do is run my drag so light that when I twitch the rod to jig the lure I hear slight ticks of the drag. If your drag is too tight, you’ll pull the jig out of their tentacles. I haven’t noticed any favourite colours but find I’m more reluctant to grab something with stripes than full colours. Winter species Gold Coast

Tiger squid are still about and I find them around rock walls more than any other places, in locations such as the Grand Hotel and Tallebudgera Creek wall. Flathead are in full swing in preparation for their yearly spawn. With the cancellation of this year’s Flathead Classic, we are interested to see how the fish react to no pre-fishing and three consistent days of hundreds of fishers trying to catch them.

They are busting up on baitfish, making it much easier to determine where they are. People are also doing well and getting them off the beach on pilchards and metal lures. The closer reefs offshore will hopefully produce good size mulloway on live baits and lures such as soft vibes and metal jigs.

If you keep an eye out, you may stumble across some tuna. It can be fun when you see the birds diving in and the fish smashing helpless bait schools. Casting a small stickbait or metal lure will often pay off. If you incidentally and unintentionally catch a pearl perch or snapper, try your best to remove the hook or lure without lifting the fish from the water for the best chance at a successful release to do the fish justice and save yourself from a fine. Winter species Gold Coast

Hopefully you can get out there this month and make the most of the end of winter and start of spring.