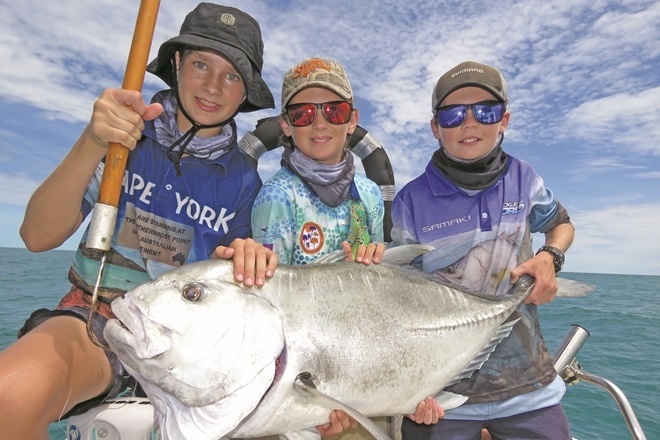 Tom needed help from his companions to land this monster giant trevally, as well as a bit of hasty boat choreography from the skipper. Not bad for his second fish on a soft plastic. These fishos will remember this beast for a long time!

THE Cape has experienced its biggest wet season in over a decade, with heavy rainfalls at the end of April cutting the Peninsula Development Rd in many places, including the Hann, Archer and Wenlock rivers. Weipa copped over 2m of rain in a prolonged wet that extended from early December to the above April event, an above-average total. Cape York condition

At the time of writing, Cook Shire graders and road crews were hoping to get their comprehensive road maintenance program fully underway finally – a task that should have the road ready for the major tourist influx, which reaches a peak once the mid-year school holidays commence. On the fishing front, the five months of rain have created ideal conditions for many species to spawn, including barramundi of course.

Most of the major rainfalls occurred around the full moon, at the time most probable for barra breeding activities. Though fishers won’t reap the benefits of these optimum spawning conditions for at least three years, the fact that wetlands and billabongs are still overflowing augurs well for fingerling recruitment and survival, which should eclipse most if not all similar events over the past decade.Cape York condition

Meanwhile, catches of estuary species such as barra, mangrove jack, king and blue salmon and grunter have been steady though a little spasmodic, considering the ongoing weather changes. Most rivers have had significant freshwater inflows, and this has tended to push most species towards the downstream reaches.Cape York condition

However, this situation will change quickly once the run-off slows down however, in most instances discharges are expected to continue to well into June. One species that is not generally regarded as being compatible with a freshwater run-off is the queenfish, but it has been my experience that this great sportfish is very at home and active when tannin-stained water pours into the estuaries, particularly around river mouths.Cape York condition

A day trip with three local fishers on school holidays confirmed that this was still happening. We headed about 50km south of Weipa to a small estuary that was loaded with dark-coloured water when we arrived. Barra and mangrove jack were our targets but it soon became obvious that both species were a little quieter than normal. However, even though the water was almost drinkable when I tested its saltiness, the creek was full of rolling queenies that responded eagerly to cast poppers.Cape York condition