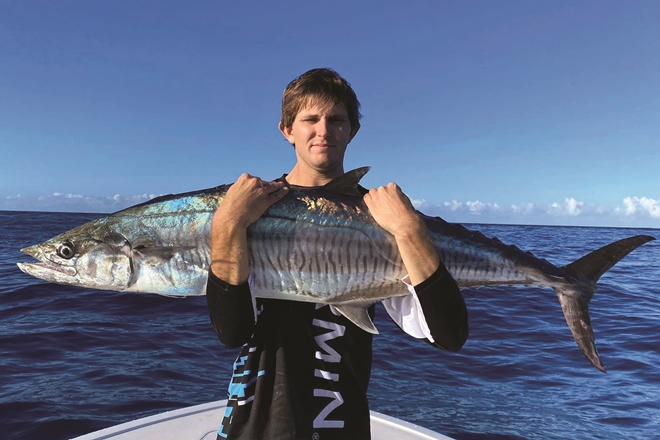 Luke nailed an absolute cracker of a spanish mackerel in between strong gusts.

Cracking catches from the bay

THE past few months have provided a bit of a smorgasbord when it comes to species being caught in the Moreton Bay region. Morgan, Austin and Wilson scored another awesome catch while fishing off Nudgee Beach with mum and dad. Taking home a cracker feed of winter whiting, this was a great effort and I can only imagine the smiles on their faces when hauling these beauties on board!

There have been plenty of winter whiting caught in Moreton Bay over the past few months – around Cockle Banks, the mouth of the Caboolture River, Nudgee Beach, Cooper Channel and the Sand Hills, just to mention a few areas. Preserved beach worms, live bloodworms, stripped local squid and peeled local prawns brought in the fish for those who were using traditional baits. Moreton Bay August

Those who chose to catch a feed using plastics, scored well using Ecogear Marukyu Soft Isome Plastic Worms as a cut bait on a standard long shank in #6 or #4. When using topwater lures, you really can’t go past the Bassday Sugapen, as they have proven themselves many times over as a cracker lure for whiting.

Everyone seems to have their go-to colour, but from what we see in store, all colours work well. For those who want to test their skills, squid have been a good choice recently. Tiger or arrow, it does not matter because they all cook up well. Woody Point and Shorncliffe Pier were the hotspots when it came to catching a feed, as both locations gave up their fair share of tasty squid. Moreton Bay August

Whether you were land-based, out fishing the shallows in a tinnie, or dropping deeper out off the islands, great numbers were taken home for a feed. Waan certainly scored well, with a 1.1kg beast taken off Woody Point, while fishing the shallow reef areas. Brent also managed to land a feed of very nice tiger squid during his visits to Woody Point and Shorncliffe Piers.

On average they were coming in around the 1kg mark, which is a hefty lump of calamari that anybody would be happy to take home. Even our junior anglers managed a great day out, and young Ivy proudly caught her very own garfish – caught and landed all by herself. Her dad Christopher was there for moral support and a bit of coaching, if she needed it.

Well done Ivy, hopefully you will go on to put future feeds on the table. Young Luke has been at it again, finding a clear window for a few hours and turning it into a spanish mackerel fest! Check out the one pictured. Over the past few months, we have seen such a massive increase in family fishing time, which has been nothing short of awesome. Moreton Bay August

Understandably, we have all been ‘too busy’ with work to spend quality time out and about with the family. Now that people are returning to work and life is showing a little of the normality we once took for granted, we are still seeing family trips out for a few hours in the morning or afternoon. Perhaps it is not about what we lost in early 2020, but rather what we may have regained.

A lot of stores are having issues keeping their shelves fully stocked due to the closure of many manufacturing facilities around the world. Stock levels are getting better, particularly in the independent stores, so keep dropping in and checking things out. Just a quick update on the live bloodworm and white spot syndrome containment effort – it is still in effect from the lower part of Caloundra to the Tweed River, so if you are planning on using live bloodworms, please stay within the containment zone. Moreton Bay August

The Tackle Land crew would like to say a very special thank you to everyone who has shown their ongoing support over the past few months. We would like to thank all our new customers for dropping in and checking out the store.

In the months to come, we hope all our readers, customers and their families stay safe!