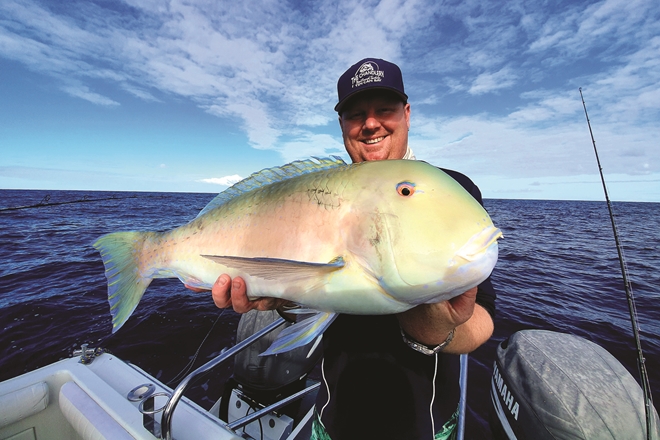 The author with a solid tuskfish caught out wide.

G’DAY crew, I hope everyone had a chance to wet a line over the past few weeks – I know I sure did! I managed to get a few good trips in between work, family life and coming down with bronchitis for a week. Tin Can Bay bites

I had a good trip to Hervey Bay with a friend, hunting the flats looking for blue bastard and golden trevally. No bastard were caught, but we did manage a couple of nice golden in slightly trying conditions. I also managed to get out to Borumba and spend the day with Peter Morse chasing bass on fly, and have had a couple of good sessions in the local creeks earlier in the month, targeting the trevally that have been in Tin Can Bay in considerable quantities and size. Tin Can Bay bites

At this time of year, good numbers of golden trevally can be caught from in the creeks.  Using your sounder to find schools of fish and targeting them with small prawn lures, vibes, flies and even micro jigs on 6lb braid and 14lb leader makes for awesome fun.  We have been having success with Palms Slow Blatt in 20g and Miniature Dax in 10g and 14g.

This style of fishing is made easier by using a sounder with sidescan because the school may not be under the boat. I recently sounded a school of fish that was 5m to my starboard side, which was 20m wide and about 30m long. I managed to pull three nice 60cm fish out of the school before it moved on. I end up with nine fish for the session and six of them were over 60cm, and all were caught on metal jigs.

If I wasn’t using my sidescan, I wouldn’t have even known they were there. Using your sounder and its sidescan feature to mark schools of fish can save you time blind casting and improve your catch rate dramatically. If you want to have a chat about how sidescan works, pop down for a yarn and we’ll be happy to interpret and explain what we see on the screen. Tin Can Bay bitesTin Can Bay bites

Anyway, enough about my fishing exploits, let’s have a look at what else has been on the bite the past few weeks. As it’s still fairly cool, we all know that squid are on the chew, along with winter whiting. People have been making the most of them recently and the hot spots have all been firing, with the mouth of Kauri Creek being the pick of the spots for winter whiting and the powerlines in the bay are great for a feed of squid. Tin Can Bay bites

The little bit of dirty water from rain at the start of August has helped with flathead catches.  We have had reports of good numbers of fish showing up around Carlo Sand Blow and the surrounding flats all the way up to Ida and Pannikin islands, and in the coming months they should start to be a very viable target. I am looking forward to tossing some big flies and swimbaits around our local flats for bigger models.

Offshore fishos have made the most of the fine weather windows and have been punching it out over Wide Bay Bar, dodging migrating whales. These anglers have been rewarded with cracker catches such as tuskfish, sweetlip, hussar, moses perch, jobfish and red emperor. By all accounts, snapper and pearl perch were on the chew too.

Before the snapper and pearly closure, there were substantial-sized snapper being caught in close on a mixture of baits, slow pitch jigs and plastics. The crews that went further north didn’t seem to have the same by-catch problem as those who fished due east and south of the bar. They also seemed to have fewer taxman problems. Tin Can Bay bites

There have been solid catches of cobia, amberjack and wahoo coming from around Double Island over the past few weeks. Off the beach we have been seeing nice hauls of whiting, bream, dart and flathead, with fresh worms and pipis working the best. Recently, slide baiting fishos have been getting stuck into nice spanish mackerel from the sand. Tin Can Bay bites

Whole garfish, pike and live tailor have proven to be the most successful baits for those fishing from the beach. Don’t forget, if you are coming to Tin Can Bay for a fish, bring your crab pots because there are still plenty of fine sand crabs being caught in deeper parts of the channel. Though don’t stress if you do forget them or any of your fishing gear, as we have all your crabbing and fishing needs covered.

And there are still quality mud crabs to be caught, but you will need to put the time in to find them. Well crew, that’s a wrap for another month. Stay safe and healthy, keep warm and get out and have a fish! I know I’ll be on the water somewhere, that’s for sure. Tin Can Bay bites

Find us at Tin Can Bay Marina, Emperor Street for all your boating and fishing needs, or visit our website here.