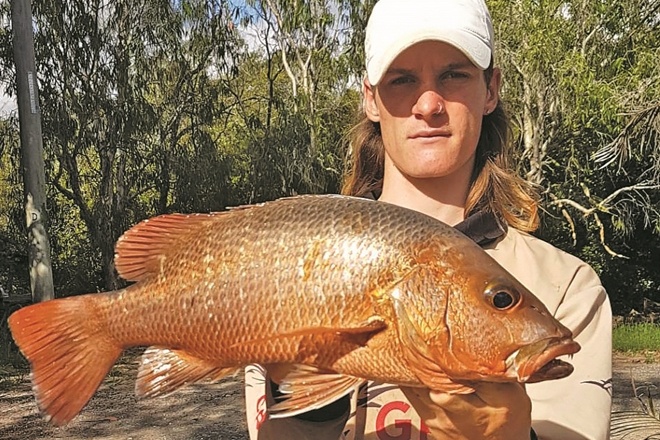 WITH good falls of rain together with new and full moon tides, mangrove jack and mud crabs have been a feature in the Bundaberg area over the past month. To say the rain was welcome would be an understatement, and we need more for the benefit of both the land and the waterways. Bundaberg February

Prawns should also become a little more active on a big tide after the rain. With high 20C water temperature, mangrove jack have become very active and anglers are successfully targeting them in the usual locations. Most of our creeks, rivers and estuaries have good rock or mangrove structure that this species is fond of.Bundaberg February

I have heard reports of early morning topwater jack captures, as well as the usual fresh flesh bait caught models. Mangrove jack are a species that many anglers have on their bucket list, while several anglers are jack specialists and target them with different techniques, such as topwater, hard-bodies and soft plastics. The most common and probably the most traditional method of targeting jack is with the use of a fresh flesh bait strip, usually mullet.

Other fresh flesh bait species and small baitfish such as sprat can also be effective. Land-based anglers will set themselves up on a bank adjacent to good rock formations or black bank, while boat-based anglers will anchor up on similar features. Though anglers may have specialist local knowledge about how and when a particular spot is fishing well, my preferred times are on the turn of the tide – either the last couple of hours of a flood or ebb tide.Bundaberg February

The slowing tidal stream at these times provides the opportunity to get your bait close to both the structure and the bottom. A medium weight outfit is a minimum requirement for jack, as they will put up a great fight trying to make it back to the cover they’ve been holed up in. It is often said that a mangrove jack targets its prey by choosing the time to strike and then hitting its prey after it has turned back toward the piece of structure from where it launched its attack.

As a result, a heavier leader is a must when bait fishing and luring for jack and will help reduce losses from contact with sharp rock and oysters. Hook size will depend on the bait type. Your trace should be around 40-60cm and sits below a swivel and sinker, and this is the best basic rig. For those keen on targeting jack with lures, a good starting point is your local tackle store where the staff can provide you with up-to-date local advice on the lures and colours that have been working.

Bait anglers Bruce, Tony and Joel have all experienced success targeting jack over the past month, and I have learnt a lot about jack fishing from these fishers. After a bit of a stop-start beginning to the mud crab season, the recent rain has helped muddies become a little more active and available in local creeks and rivers. While the water temperature has increased, the rain in most areas was the missing ingredient.Bundaberg February

After these falls, muddies were out and about and more accessible to keen crabbers.  There’s often a lot of discussion about the best type of bait when targeting mud crabs. The usual answer at the end of the discussion is fresh is better, and oily varieties such as mullet frames or heads, mackerel frames, and chicken frames or necks work well.Bundaberg February

Make sure you take the time to check that you read up on the current crabbing regulations. Over the next month it will still be worth targeting jack and muddies. Prawns should become more active and bigger spanish mackerel should be appearing in good numbers offshore.Bundaberg February

As always, I can be contacted via email at fishnboat@bigpond.com or via mail at PO Box 5812, Bundaberg West Queensland 4670.