With the Easter holidays all done and dusted, Mother Nature continues to put the brakes on the offshore scene, with 2m swell and a persistent southeast wind. This has kept many anglers searching for other options, with the estuary the most popular. Noosa weekend fishing

When the opportunity arose, a few of the larger charter boats made the effort to fish Sunshine Reef and, with the lighter current, had some success. A mixed bag of reef fish including sweetlip, pearl perch, a few cracking coral trout and the occasional big spanish mackerel hit the deck. These fish falling for live bait and whole pilchard dead bait fished hard on the bottom. The tuna are very much active and out on the feed, but at this moment in time, all we can do is watch from the land. Noosa weekend fishing

Inside, whiting have been on the move and the river mouths of both the Noosa and the Maroochy rivers have been holding good fish around the mid-30cm mark. These fish have been feeding hard on worms, yabbies and small strip bait of squid. Simple running-sinker rigs with 4-6lb lines provide the most fun because these fish certainly fight hard for their size. As we have been having a reasonable run of prawns in the Noosa recently, it’s not a bad idea to chase these whiting on surface poppers as well. Noosa weekend fishing

Focussing on the river mouth, bigger flathead have been found along the deeper drop-offs, especially around the dog beach and current line. Using the same running-sinker rig works very well here too. It is wise to step up leaders to 12lb or more and try using light-gauge gang hooks with whole hardyhead or pilchard as bait. The bigger whole-fish bait will get the attention of the larger fish. Be sure to safely release the bigger fish because they are fattening up for the winter breeding season. Lip grips are a great tool to help with hook removal and remember to support bigger fish under their belly for photos and return.

In the lower estuary around Woods Bays, Noosa Sound and along the current line, trevally and an occasional tailor have been giving anglers a run for their money. These fish are taking a wide variety of bait, with small herring live bait the go-to along with larger 70-90mm surface walkers and poppers. These fish love to feed off the surface during early morning, so get out there and be sure to have something ready to throw at any bust ups because it can happen very quickly and be over just a fast. Running 8lb gear gives you more chance to apply a bit of pressure and get these fish in. Look at lures such as Bassday Sugapen, Zip Baits Skinny Pop as well as Rapala X-Rap Poppers. If anglers are wanting to chase these fish under the surface, the Keitech Easy Shiner in Silver Flash Minnow and Wakasagi have been smashing both diamond and golden trevally.

Lastly, crabs are on the move! We have seen some cracking catches and if you own a pot or two, now is the time to get them in the water. Make sure your pots are compliant and clearly marked because Queensland Boating and Fisheries Patrol have been out over the holiday season. Be sure to leave your pots along the mangrove edges and not in the main boating channel and hopefully you could be dining on a big buck!

On the freshwater scene, a few reports from Borumba Dam of bass being captured on small blades and Jackall TN 60. Also, at Lake McDonald, search bait such as spinnerbaits cast to the edges of the weed should get you a bass or twoNow for all the latest information log onto www.fishingnoosa.com.au for up-to-date bar and fishing reports, don’t forget to drop into Tackle World Noosa, Noosa Boating and Outdoors and Northshore Bait & Tackle in Marcoola for all the right equipment, bait and advice to get you catching. Be sure to follow us on Facebook and remember Tight Lines and Bent Spines! 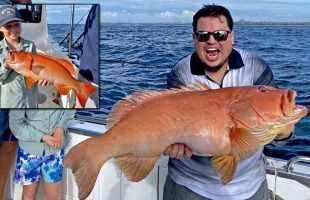