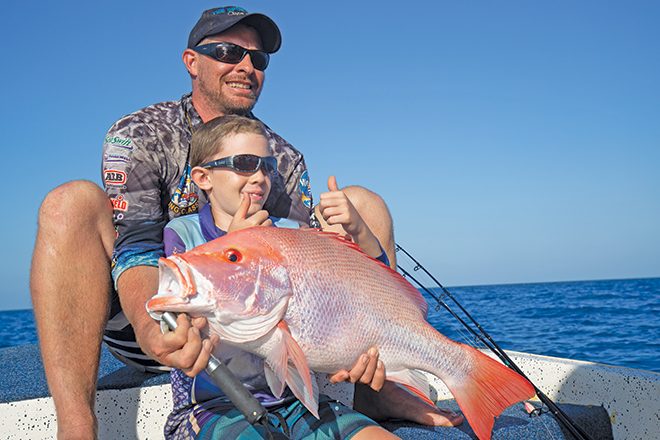 Well, as of November 1, wild barramundi are off the take list in Queensland until next February. However, the current weather patterns open up other fabulous fishing options on Cape York, while we leave barra to go do their spawning thing. November is slap bang in the middle of the ‘build up’ season here – with rising heat and humidity and increasingly calm wind spells as the lively southeast trade wind loses its tenacity. Reef Cape York

These spells allow anglers to get out to the reefs and along coastlines to fish for a wealth of tropical species in some truly magnificent country. The general Cooktown area is the closest and prime reef fishing destination for travellers coming from the south – a four-hour drive from Cairns. On a ‘glass out’, it will take only half an hour to boat to Egrett or Boulder reefs. Reef Cape York

Another 15 minutes or so eastward lies Big Uncharted Reef, while further south the enticing and sizeable Cairns and Osterland reefs, and many smaller reefs, promise many days perhaps weeks of fishing for succulent coral trout, red emperor, maori seaperch, jobfish and sweetlip of different types. Small and large-mouth nannygai tend to favour rubble areas and small rises in the open water away from the main reefs. Reef Cape York

And of course, pelagics such as spanish mackerel, cobia and longtail tuna in particular are always around and worth targeting. Plus, the Outer Reef is quite reachable in good weather from Cooktown in any seaworthy boat. Passionfruit and coronation trout, along with green jobfish abound in these waters and some of the great trevally that patrol the reef edges are of epic proportions! Never disregard fishing along the coastline too, for spaniards and fingermark in particular.

The next prime, more easily reached destination on the east coast is the Kutini-Payamu (Iron Range) area. Most years, November is the month our family and friends gather to camp at Chilli Beach in the Kutini-Payaumi (Iron Range) National Park for a week or two of absolutely cracker fishing in a very scenic area. The fish available follow a similar pattern to the Cooktown reefs, with nannygai and fingermark perhaps even more common in the inshore reefs.

Though the recent cyclone knocked the rainforest about, there are still a few nice shady camps along the beach, and the caretakers have provided a freshwater bore for campers back along the road. You can beach launch at Chilli Beach or the small settlement of Portland Roads, a little further to the north. There’s plenty to see around here too – the old wartime bunkers near the Lockhart River airstrip, the local community where you can purchase fuel and food, and the picturesque Quintel Beach where a barge delivers essential supplies on a regular basis.

Restoration Island, which can be seen from Chilli Beach, features very strongly in Australia’s history. This is where Captain Bligh and 18 sailors reached after being cast adrift from the Bounty in 1789, covering nearly 4000 miles in a 22’ open boat.

Previous The Cape’s classic weekend
Next Electric action at Hinchinbrook