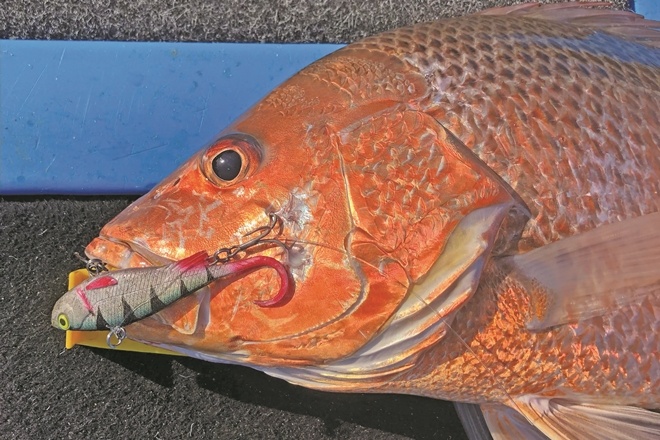 Fingermark are a sucker for vibration baits, and this one took a Zerek Fish Trap in the Calliope River.

CQ action in Harbour and rivers

OK, so December and January have come and gone, the festive season is over and most of us are back into the grind called work. Many of us are not fishing as often as we’d prefer, juggling work, kids and house duties and when we do get out, it’s for possibly rushed trips with bad tides and difficult conditions. CQ harbour river

Though the thought of saying “maybe I won’t go” never really crosses your mind, unless the conditions are extremely bad. You’d probably say, “let’s just go have a look, we can find a little creek to get out of the wind and have a fish.” It’s at these times you appreciate the truly perfect days where everything falls into place, the conditions are right and the fish are actually on the chew.

Let’s forget about the perfect scenario and go somewhere in between, when it’s blowing more than the 5-10 knots predicted but not quite 30 knots. These are what I call the common days. The tide is good enough and the wind – while it may make it a little difficult – is not really a bother.CQ harbour river

Most fishing days are similar this – where you plan for the best and it doesn’t quite work out, though you still manage to snag a few fish and have fun at the same time. It may take a bit of thinking on the water. The spots you had in mind may not be the best spots to head to anymore. You also need to keep in mind what the weather is going to be doing later in the day.

Places like Gladstone Harbour and Port Alma can turn from a nice run to an uncomfortable slog with a swing of wind direction, a tide change or an increasing wind speed. This can be especially true when you are fishing the creeks on the inside of Curtis Island, where you may be protected and not realise the changes. That’s not to say you shouldn’t start at these spots, but you may need to cross the open water before the conditions change and head closer to home and fish more protected areas.CQ harbour river

This will shorten the time you have to fish your preferred spots, though it gives you the opportunity to fish spots close by that you may previously just drive past. Often these areas are so obvious that everyone thinks they get lots of attention, when in reality it can be the total opposite. If you’re a dedicated lure angler and you’re faced with average conditions, you can change tactics and drop a live bait into a snag, the edge or a rock bar.

It could be the chance to explore those little out of the way creeks you have always wanted to try but never have. On the fishing front, barramundi are back on the cards as at the start of the month, so get your bigger lures out and change your trebles. The Fitzroy River and Port Alma will definitely be the best places to consistently chase barra of all sizes. We had rain during December and early January, but not enough to send the river into flood.CQ harbour river

This will see fish stretched through the whole system, so time on the water and persistence will be the keys to finding fish. Threadfin salmon will also be roaming around the entire river. Try Port Alma for bigger fish, where the city regions to Devil’s Elbow seem to hold smaller school size fish. Both the Calliope and Boyne rivers gave up barra to people chasing mangrove jack during the closed season.CQ harbour river

Now that they’re back on the target list, people will be out pursuing them in deeper holes with larger lures and live bait species. Smaller fish will be caught around shallow timber and rock bars. Gladstone Harbour holds good schools of fish too, the trick is to find where they are sitting. Mangrove jack will still be a common capture this month and the Boyne River holds good quantities of this fish. Reports are they have been happy to hit surface lures, and this is a spectacular way to target jack.

Fingermark or golden snapper have also been a regular take around the region, with cracking fish being caught. I am often asked where to catch fingermark and my answer is they are one of the easiest fish to target, with almost any deep rocky structure holding fish. You may have to be prepared to move a bit to find where they’re holding, but you’re always looking for the same kind of location to fish.CQ harbour river

If you can find one, often there will be more in the same area and it’s easy to catch two or three in quick succession. Trevally and queenfish are moving around the area taking most offerings, but surface luring is a great way to target these fish. Look for schools of herring sitting in slightly deeper water or around pressure points such as creek and river junctions and the back of rock bars and pylons.

Tarpon are worth a crack in the Boyne River too. There are better numbers of tarpon in the Boyne than the Calliope, but you will find schools in both rivers. Flathead will be worth a crack along the edges of sand banks in the harbour and the mouth of South Trees – which comes out at Lilley’s Beach – and Wild Cattle Creek. Whiting will be caught in the same spots as flathead and I prefer to fish the rising tide as water covers the flats.CQ harbour river

Lake Awoonga is fishing extremely well, and now the size of fish are increasing with multiple fish per session becoming the norm. It is a great alternative to fishing the salt for barra. Mud crabs were moving around during January and the fresh helped this, with most crabbers able to secure a feed or two. Prawns have also been around for those after bait or a feed themselves.

Click here for more barra and jack action around Gladstone.